Ahead of this England series, India won the T20I series in Ireland 2-0 with large wins in both the games.

India have been consistently winning T20I matches and series’ in the last 12-18 months not only at home but also in South Africa and England where they defeated some of the best teams in T20I cricket. In the series-deciding 3rd T20I in Bristol, India made a comeback after England were cruising over 11 runs an over at half-way stage. They not only restricted the hosts to 198/9 but also chased down the target with seven wickets and eight balls to spare.

Since drawing the home T20I series against Australia which had an abandoned 3rd T20I, India won every T20I assignment they were part of. India defeated New Zealand 2-1 after sneaking a 6-run win in the rain-affected final T20I. They whitewashed Sri Lanka 3-0 under Rohit Sharma’s captaincy and followed it up with another 2-1 win in South Africa. Rohit took the charge once again in the Nidahas Trophy as Virat Kohli and other specialist T20 players were rested. 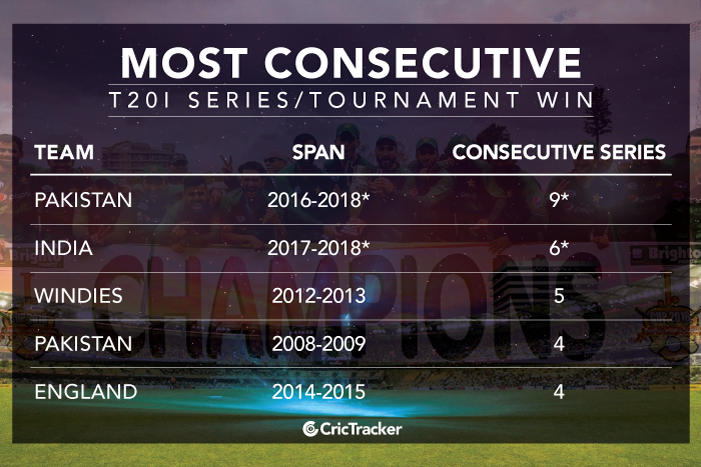 India clinched the title in a nerve-wrenching final where Dinesh Karthik hit a six on the final ball. Ahead of this England series, India won the T20I series in Ireland 2-0 with large wins in both the games. India extended their T20I series/tournament streak to six with the victory in Bristol, which is the 2nd longest streak for any side. Earlier on Sunday, Pakistan emerged as the winners of the T20I Tri-Series in Zimbabwe to extend their series winning streak to nine.

Pakistan won all the nine T20I series/tournaments that they played under Sarfraz Ahmed’s captaincy who took over after they were knocked out from the group stage of the 2016 World T20. In this span, Pakistan won eight consecutive bilateral T20I series which is also a record. India have won their last five bilateral series in this format standing only behind Pakistan. The series against England was India’s eight completed 3-match bilateral T20I series and they have won all those eight series. 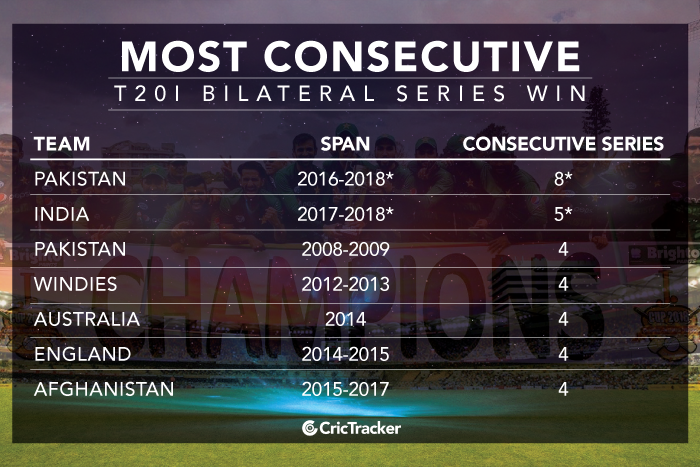