Stats: Most expensive 20th overs in the IPL

Stats: Most expensive 20th overs in the IPL

Dwayne Bravo conceded 29 runs in the final over against the Mumbai Indians.

Mumbai Indians got the better of Chennai Super Kings on a Wankhede track that was assisting the pacers throughout the game. The teams struggled to score in the initial phase and MI’s total of 170/5 was powered by the 45 runs from the last two overs by Hardik Pandya and Kieron Pollard. As many as 29 runs were scored in the final over of the innings bowled by Dwayne Bravo. The 29 runs scored by Pandya-Pollard duo in that final over makes it the joint 2nd most expensive 20th over in the IPL history.

The most expensive 20th over is of 30 runs which involved Hardik Pandya as the batter. The MI all-rounder scored 28 out of the 30 runs came in the over bowled by Ashok Dinda in the 2017 season for the RPS. Pandya hit the first five balls of that over for 6, 6, 6, 4 and 6. The innings came to an end with a wide and a bye as Pandya missed hitting his 6th boundary in succession.

During the previous season, the Kolkata Knight Riders’ pacer Shivam Mavi also conceded 29 runs including a wide. The Shreyas Iyer, who made his captaincy debut in that game for Delhi Daredevils, hit 28 runs with help of four sixes and a four in that over. The 28 runs conceded by Jaydev Unadkat in the Sunday’s game against CSK stands at No.4 in the list of most expensive 20th overs in the IPL.

Most expensive 20th overs in the history of the IPL: 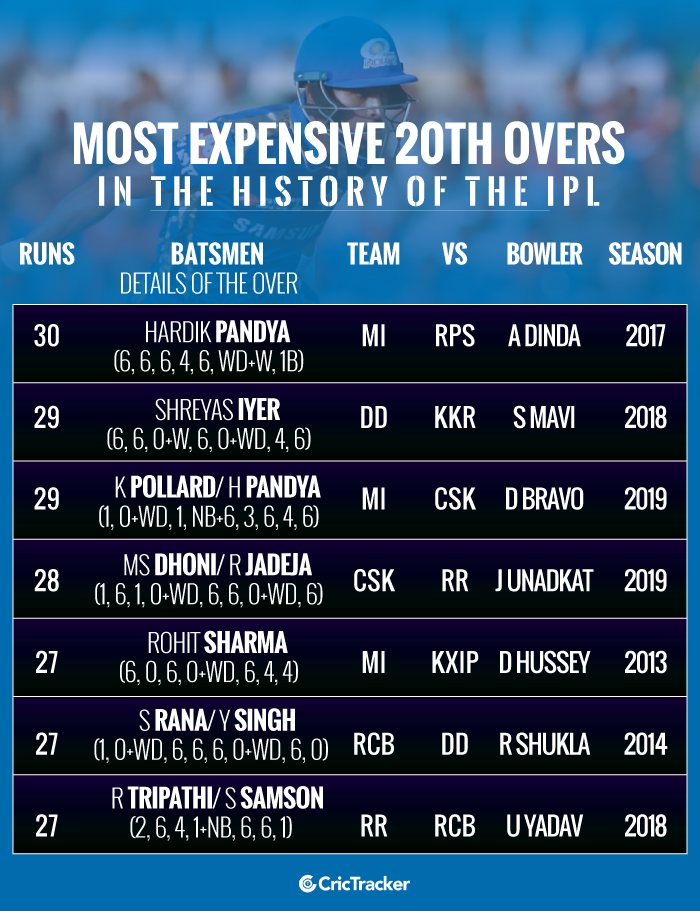