Stats: Most runs by a player in Test cricket for South Africa

Stats: Most runs by a player in Test cricket for South Africa

Hashim Amla scored 19 runs in the first innings of the ongoing Colombo Test against Sri Lanka,

Hashim Amla has been a crucial part of the South African Test team over the last decade occupying the crucial No.3 position and produced many iconic innings. Amla, with his patience, batted longer periods when required and also accelerated like does in the limited-overs. The right-hander has been one of the best players who can adapt not only to the situations but also adjusted to the versatile conditions. In the ongoing Test series against Sri Lanka, Amla completed 9000 runs in Test cricket.

Amla needed three runs to reach this milestone coming into the 2nd Test match in Colombo. Thus, Amla became the 3rd player to score 9000 Test runs for South Africa. Jacques Kallis and Graeme Smith have scored 13206 and 9253 runs respectively. Amla has scored 28 centuries in this format which are the 2nd most by a South African behind Kallis (28). Amla needed 119 Test matches and 204 innings to reach the milestone and has an average of 47.52 after the 19 he made in the first innings of Colombo Test.

Hashim Amla, who used to be at the top in the lists of fastest to ‘n’ runs for South Africa, is now the joint 4th slowest of the 15 players and the slowest South African to complete 9000 Test runs. His team-mates Kallis and Smith needed 188 and 195 innings respectively for this milestone. Amla shares the 4th slowest to 9000 Test runs spot with England opener Alastair Cook. Allan Border needed 207 innings for this feat while Steve Waugh and Shivnarine Chanderpaul needed 216 innings.

Since achieving his career highest Test average of 52.78 at the start of 2015, Amla’s record in the longer format caught a slope. This also resulted in him stepping down from the Test captaincy a year later. In the last 63 Test innings, Amla scored only 2259 at a mediocre average of 36.44. The South African No.3 reached 6000 Test runs in 128 innings and needed 24, 26 and 26 innings respectively to reach the next milestone in this format.

Most runs in Test cricket for South Africa: 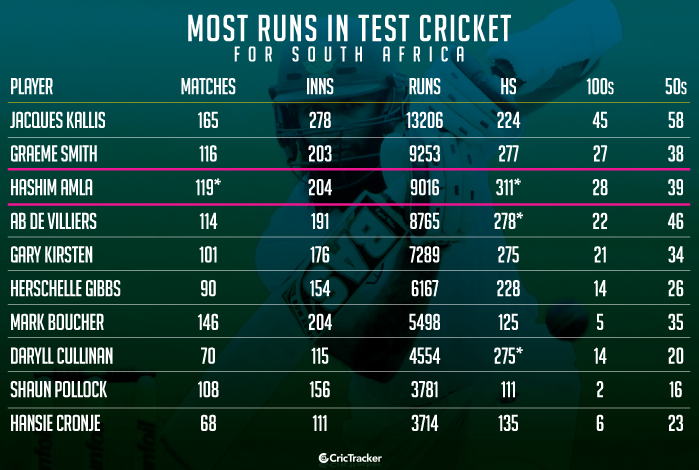