Stats: Most sixes by a player in the Twenty20 format

Stats: Most sixes by a player in the Twenty20 format

Andre Russell has been a different beast altogether in the Twenty20 format since his return to cricket in 2018 after serving a ban. In these two years, Russell not only excelled with his big-hitting but also improved his consistency with the bat. Across 82 T20s since his return, the all-rounder has amassed 1688 runs at an average of 33.1 and at an impressive strike rate of 182.29.

Until January 2017, the Caribbean hitter averaged only 24.18 but had a good strike rate of 164.71. During Saturday’s game against Cumilla Victorians, Andre Russell scored an unbeaten 20-ball 37 to help his team Rajshahi Royals reach a winning total. Russell struck four sixes during that knock but zero fours. With the 3rd out of the four sixes, Russell completed 400 sixes in the Twenty20 format in only his 261st inning.

He thus became only the 5th player in the Twenty20 history to struck 400 sixes. Chris Gayle is well placed on the top with as many as 966 sixes. He is 34 hits away from becoming the first player to struck 1000 T20 sixes. Gayle is already the only player with 10000 runs and 1000 fours in the T20 cricket. The 2nd player on the sixes list is Kieron Pollard with 647 sixes; which is about 300+ maximums fewer than the Universe Boss.

Pollard is also the 2nd highest run-getter in the T20s as he surpassed Brendon McCullum’s tally of 9922 runs during the recent T20I series against India. The new limited-overs skipper of the West Indies is only 65 runs away from becoming the only the 2nd player with 10000 runs in the Twenty20 history. Brendon McCullum’s 485 sixes are the 3rd most by a player in T20s but those are nearly half the number of sixes hit by Gayle in his career thus far.

The domination by the West Indies players in the sixes list is quite evident with the presence of four names in the list of top 10. A total of ten players till date have hit 350 and more maximums in the shortest format. Rohit Sharma is the recent entrant to this list, who is not only the first Indian to reach here but also the first Asian as well. 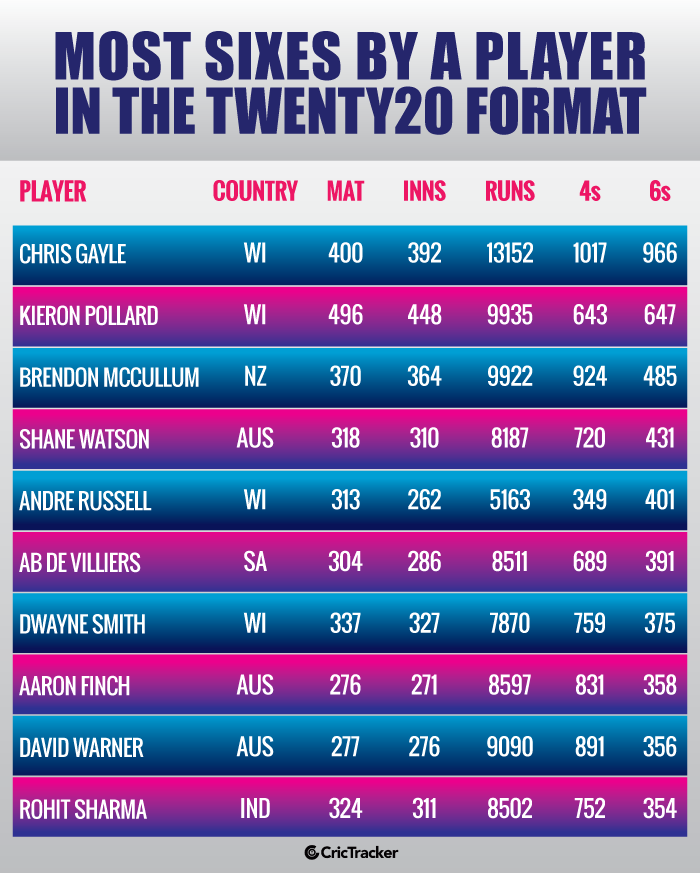