All the interesting stats and numbers recorded during MS Dhoni’s surprise return as Indian captain.

MS Dhoni turned up as Indian captain in a surprise move made for their Super Four match against Afghanistan ahead of the key final of the Asia Cup. The captain and vice-captain, Rohit Sharma and Shikhar Dhawan, respectively took rest following their efforts in their earlier matches. As a result, the senior man took up the responsibility of leading the Indian team for the 200th occasion in the ODI format. India made as many as five changes for this inconsequential game.

All the interesting stats and numbers recorded during MS Dhoni’s surprise return as Indian captain:

3 – Number of captains led India in this 2018 season; Virat Kohli in England, Rohit Sharma and MS Dhoni in this Asia Cup. Only the second time since 2000 that three different players led Indian team in ODIs in a single season. Dhoni, Virender Sehwag and Gautam Gambhir took charge for the Men in Blue in the format during the 2011/12 season.

4 – MS Dhoni is the 4th captain to lead India in an International game after Kohli, Rohit and Ajinkya Rahane in 2018. India had as many as four captains in 2010 and 2011 (Dhoni, Sehwag, Gambhir and Suresh Raina). They also had four different captains in 1999 and five different Test skippers in 1959. 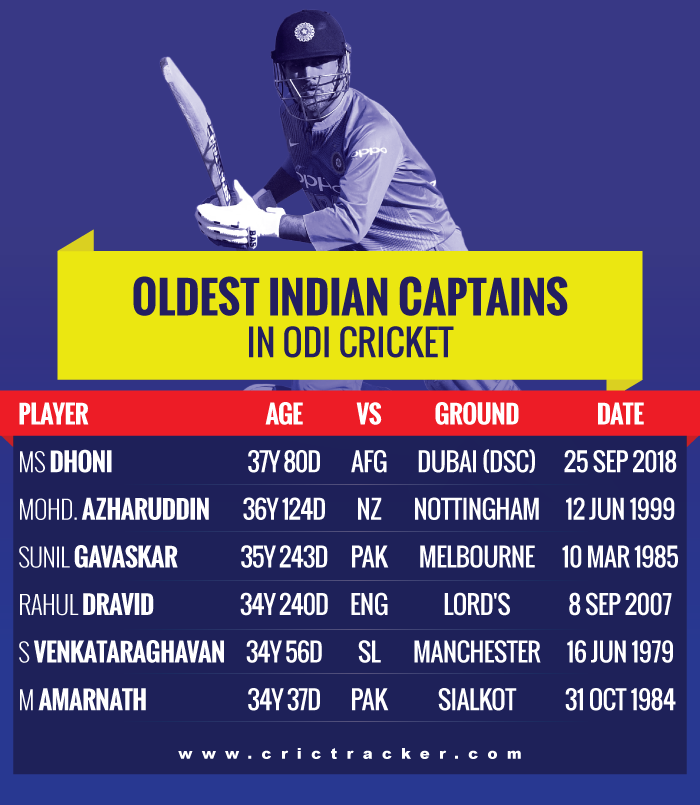 37y 80d – MS Dhoni is also the second oldest keeper-captain in ODI cricket after Alec Stewart. The former England keeper’s last ODI as the leader was in 2003 World Cup against Namibia at the age of 39 years and 317 days.

200 – MS Dhoni became only the 3rd player to captain in 200 One-Day Internationals. Ricky Ponting and Stephen Fleming captained in 230 and 218 ODI matches respectively.

696 – Number of days since Dhoni’s last match as captain of Indian team. He last led India in an International game was against New Zealand on October 29 in 2016 in Vishakhapatnam.