Stats: Nine Bangladesh players who scored less than five runs in an inning

Stats: Nine Bangladesh players who scored less than five runs in an inning

Bangladesh innings was the 31st instance when ten and more batsmen failed to make double-digit scores.

Bangladesh’s troubles in the ongoing Caribbean tour began when their skipper Shakib Al Hasan lost the toss in the first Test on a spicy track. In such alien conditions, the Asian team’s batsmen faltered right from the first ball. Bangladesh were bowled out for just 43 runs, their lowest total in Test cricket and the lowest for any side in nearly 43 years. Their innings lasted 18.4 overs which is the 2nd shortest first innings in the history of the format. The collapse began when Kemar Roach dismissed Tamim Iqbal and Mominul Haque in successive overs.

Roach followed it up with a deadly jolt to the opposition by removing the trio of Mushfiqur Rahim, Shakib and Mahmudullah for ducks in a space four balls. Roach’s destruction reduced Bangladesh to 18/5 before Liton Das showed some resistance scoring 25. The opener was dismissed as the 6th wicket when the score was 34. They lost three more wickets for just one run before Rubel Hossain scored 6*, the 2nd best scorer for Bangladesh, and pushed his team’s total to 43.

Bangladesh innings was the 31st instance when ten and more batsmen failed to make double-digit scores. South Africa against England in the 1924 Birmingham Test was the only instance of all the 11 batsmen failing to get into double digits. Bangladesh’s innings against Windies had as many as four players bagging ducks, two players scoring one run, two players scoring two runs and one player scoring a couple.

Thus, their innings became only the 4th instance of as many as nine players scoring five and fewer runs in a Test inning. This was also the first such instance in 86 years with the last such occurrence in the 1932 Melbourne Test by South Africa against Australia. Interestingly, all the previous three instances were recorded by the South Africans. They had nine batsmen dismissed below five in the 1889 Cape Town Test and 1924 Birmingham Test both against England. 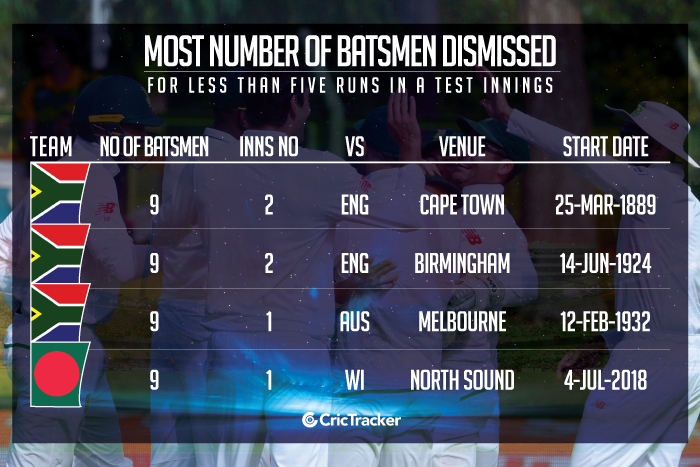