Stats: Oman bowled out for just 24 against Scotland in a One-Day game

Stats: Oman bowled out for just 24 against Scotland in a One-Day game

Oman is having a tough week as they lost all the three matches in the Quadrangular T20I series at home that involved Ireland, Scotland and Netherlands. The tournament was followed by a 3-match One-Day series against the T20I series winners Scotland. The series started with the hosts Oman getting bowled out for just 24 at the Al Amarat Cricket Ground. Khawar Ali of Oman alone scored 15 runs and scored the only boundary during their innings.

After electing to bowl first, the Scotland team had Oman four down for just eight runs by 5th over. As many as three of Oman’s top four got out for a duck. Opening bowler Ruaidhri Smith claimed a 4-wicket haul while his partner Alasdair Evans took a couple of wickets to leave the hosts reeling at 24/7 after 15 overs at drinks break. Adrian Neill picked up three wickets in the space of five deliveries after the resumption.

As a result, the Oman team were bowled out for 24 in 17.1 overs that included three runs coming from wides. Scotland needed only 20 deliveries to chase down the target as skipper Kyle Coetzer scored 16 runs from nine deliveries with three boundaries while Matthew Cross scored 10 from 11 balls. The game lasted only 110 minutes in total as it began as 9:30 AM and ended at 11:20 AM. This series doesn’t have ODI status which saved Oman from bagging embarrassing records but has been listed as a List A match. 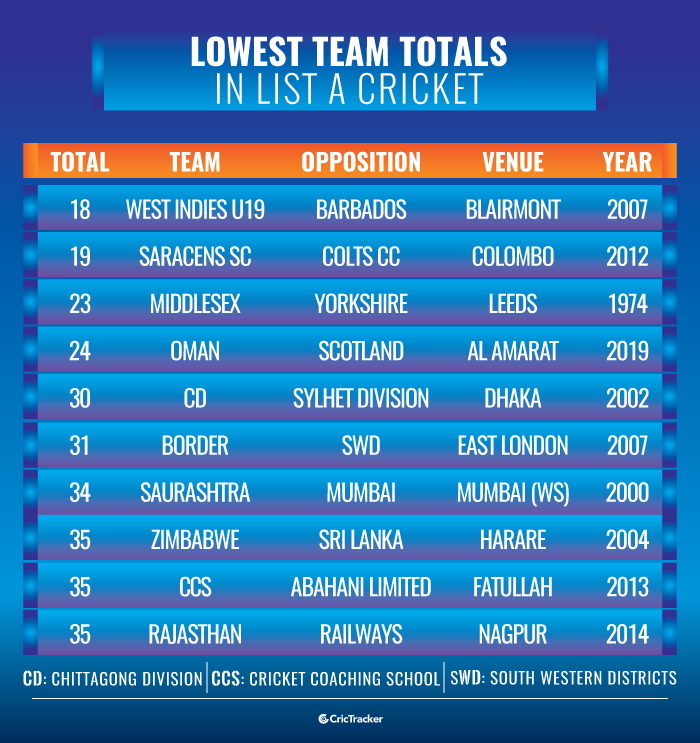 Their total of 24 is the 4th lowest total in List A cricket with the lowest been recorded by the West Indies Under-19 team in 2007 when they were bowled out for just 18 runs against Barbados which was part of the KFC One-Day Cup in the Caribbean Islands. Scotland’s victory with 280 deliveries to spare is the 6th biggest in List A cricket and the 2nd biggest in the 50-over matches.

The Colts Cricket Club chasing down the target of 20 against the Saracens Sports Club in 2.2 overs during the 50-over fixture in 2012. This game could have been listed at the top in ODI records if the game had the international status. Oman’s total of 24/10 could have thumped Zimbabwe’s total of 35 against Sri Lanka in 2004. Similarly, Scotland could have held the biggest ODI win by bettering England’s win over Canada in 1979 CWC with 277 deliveries to spare. 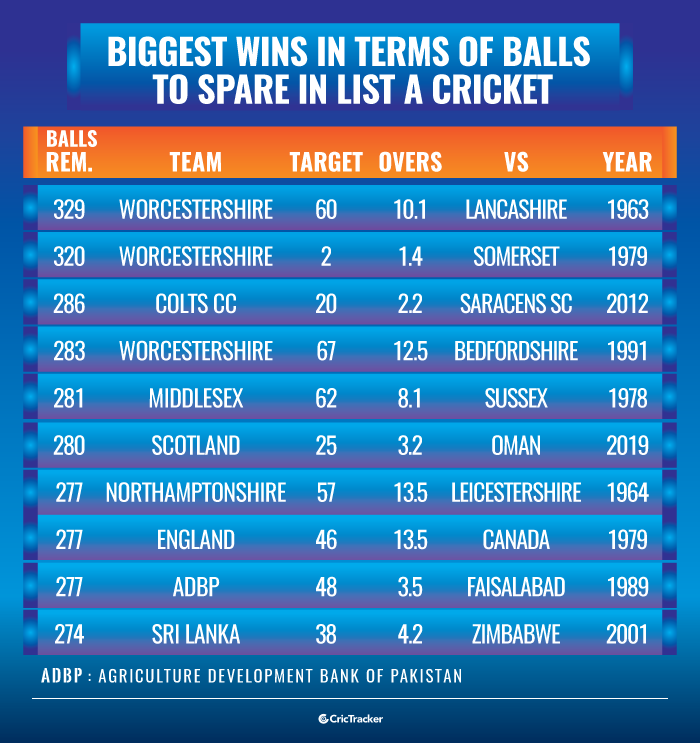 (Note: Somerset declared at 1/0 after playing only one over during the 1979 game against Worcestershire)