Stats: Players who hit a six on the final delivery to win a T20I match

Stats: Players who hit a six on the final delivery to win a T20I match

Ireland's Stuart Poynter hit a six on the final delivery of the game against the Netherlands.

The Quadrangular T20I series played in round-robin format was hosted by Oman involved Ireland, Netherlands and Scotland as the other three teams. The tournament that concluded on Sunday was won by Scotland who topped the round-robin stage courtesy of NRR. The Netherlands were on course of taking the title with their 3rd straight win in the tournament when they faced Ireland in the first of the two games played on Sunday.

However, a thrilling last-ball victory for Ireland ensured the Dutch team didn’t get a chance to grab the title. The Netherlands were cruising at 116/0 in the 10th over but a collapse pulled them back and restricted them to 182/9. Andy Balbirnie’s 50-ball 83 gave a chance for Ireland to win the title. They needed to chase the 183-run target with four deliveries to spare. The equation came down to 16 runs needed from 11 balls but the Irish side could only earn four runs from the next five deliveries.

With six runs needed from last three balls, Ireland missed out on surpassing Netherlands’ NRR. Boyd Rankin turned out to be Ireland’s 9th wicket on the 4th delivery of the final over bowled by Paul van Meekeren while Stuart Poynter denied a single on the penultimate delivery. But Poynter finished the game in style by sending the length delivery from Meekeren over the ropes over the deep mid-wicket.

Later, Scotland thumped down the hosts Oman to clinch the title. They chased down the target of 112 in only 15.3 overs when they needed to do it with at least three balls to spare. Poynter became only the 6th batsman to win his team a T20I by hitting six on the final delivery of the match. Moreover, he is the first to do it when his team required exactly six runs.

Dinesh Karthik hit a six during the last year’s Nidahas Trophy against Bangladesh when India needed five from the last delivery of the tournament. Poynter, in fact, is only the 2nd player in international cricket to hit a maximum when six runs were needed from the final ball of the game. Windies’ Shivnarine Chanderpaul achieved this feat in the 2008 ODI against Sri Lanka off Chaminda Vass.

Hitting six on the final delivery to win a T20I match: 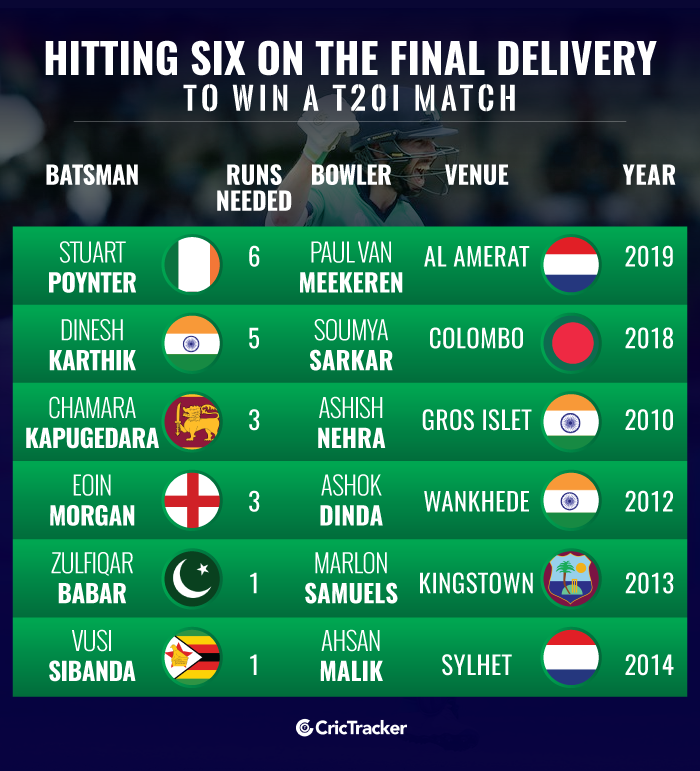