Stats: Prithvi Shaw becomes the joint-youngest to score a fifty in the IPL

Stats: Prithvi Shaw becomes the joint-youngest to score a fifty in the IPL

The title above might sound a little peculiar, but Prithvi Shaw really has become the joint-youngest to score a fifty in the Indian Premier League. The youngster has taken giant strides ever since he made an impressive first-class debut in the recently concluded Indian domestic season, led his side to the U10 World Cup title. Now, he’s playing the greatest T20 league in the world and is making his mark.

Shaw, as on 27th April 2018, is 18 years and 169 days old. Incidentally, Sanju Samson too had scored a fifty playing for Rajasthan Royals at the age of 18 years and 169 days, who previously was the youngest fifty maker in the IPL. Now, he has a company in another fabulous talent in Shaw, who registered 62 runs in 44 balls.

His innings reminisced people of Sachin Tendulkar’s early days as a cricketer. Technically profound and an astute reader of the game, Shaw played some scintillating shots. The way he smacked Mitchell Johnson for two sixes over mid-wicket made the entire cricketing universe bow down to this teenage talent.

Ishan Kishan and Rishabh Pant amongst others on the list

In the list of youngest fifty scorers in the IPL, there are some other wonderful names like the Mumbai Indians keeper Ishan Kishan and DD wicketkeeper-batsman Rishabh Pant. A popular teenage prodigy in the country, Pant has already made his International debut. Probably one of the finest batting talents in the country, his 69-run knock against Gujarat Lions earned him the third position on this elite list.

Ishan led the India Under-19 side in the 2016 World Cup and reached the finals as well. He smacked a brilliant fifty against the Sunrisers Hyderabad in the previous edition, which earned him the 3rd spot. Kishan is currently with the Mumbai Indians and is getting to play at number three for the club, which is quite an opportunity for the Jharkhand boy.

Shreevats Goswami registered a fifty in the inaugural IPL and was touted as the heir to MS Dhoni as a keeper-batsman. But the youngster lost his way and inconsistency confined his boundaries to the domestic circuit. He’s with the Sunrisers Hyderabad this season and is hoping to get some games to prove his worth. 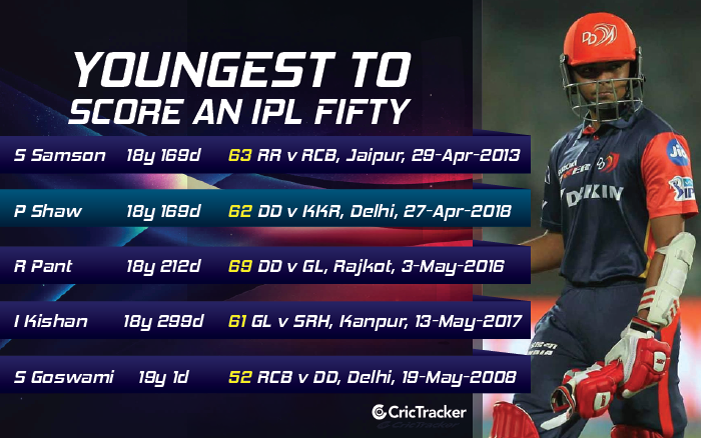