Prithvi Shaw made full use of the early Test debut scoring a brilliant 134-run knock in the first two sessions of the Rajkot Test match against the Windies. It is the same venue where he made his first-class debut and scored a century. Thus, he became the first player to score a century on FC debut and Test debut at the same venue. Shaw brought up his half-century in 56 balls and raced to a three-digit score in 99 deliveries taking only 43 for his second fifty.

It was Dhawan whom Prithvi Shaw replaced in the Test XI that played in England. The left-handed opener scored a 187-run knock on his Test debut against Australia in 2013. Dhawan brought up his century in only 85 balls in that game to set a record for the fastest Test century on debut. Shaw’s 99-ball century in this match is the 3rd fastest ton by a batsman on Test debut. Dwayne Smith scored a 93-ball hundred in the 2004 New Year Test against South Africa.

Windies’ Basil Williams reached the three-figure mark off 117 balls on his debut against Australia in 1978 just before getting out. His knock held the record for more than 25 years until Smith also from Windies came up with a 93-ball century. Since 2004, as many as five players bettered Williams’ achievement including three of them against the Caribbean Team. Bangladesh’s Abul Hasan scored a 106-ball century on his debut in 2012 that too while batting at No.10.

Fastest century by a player on debut in Test cricket: 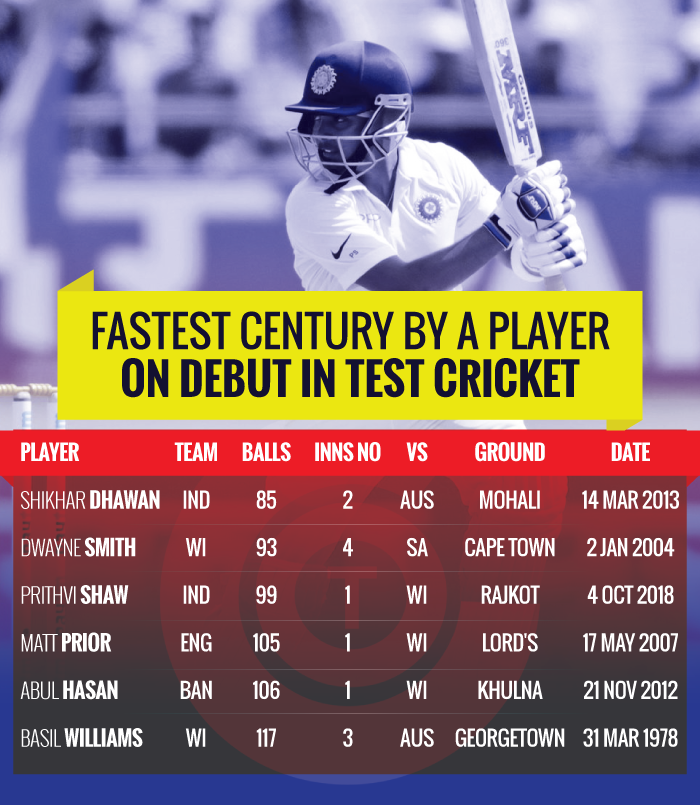