Stats: PSL 2020 musters the highest run-rate in the last one year

Stats: PSL 2020 musters the highest run-rate in the last one year

The Karachi Kings won the tournament, defeating Lahore Qalandars in the final.

The 2020 edition of the Pakistan Super League (PSL) came to a close on Tuesday, October 17 with the final between the Karachi Kings and the Lahore Qalandars at the National Stadium in Karachi. After four seasons, the Kings, captained by Imad Wasim, got their hands on the trophy, winning the final by five wickets with eight balls to spare. It was also the Kings’ maiden appearance in a PSL final.

After losing the toss and being put in to field first, the Kings restricted the Qalandars to a below-bar 134 for the loss of seven wickets in 20 overs. Waqas Maqsood, Arshad Iqbal and Umaid Asif picked up two wickets each for the home team. For the Qalandars, Tamim Iqbal top-scored with 35 runs off 38 balls with four fours and one six. Fakhar Zaman contributed with 27 runs off 24 balls with four fours.

But from being 68 for no loss after 10 overs, the Qalandars couldn’t inject any sort of momentum into their innings. In the run-chase, the Kings lost Sharjeel Khan and Alex Hales cheaply, but a 61-run stand between Babar Azam and Chadwick Walton got them back to track. The 26-year-old Babar was again at his very best as he stayed unbeaten on 63 runs off 49 balls with the help of seven glorious fours.

In the meantime, the PSL managed to carve its name at the top in a unique list. The tournament has aggregated the highest run-rate among all the foreign T20 leagues. The league has amassed a rate of 8.64, which translates to nearly 173 runs in every innings. Though the final and Qualifier weren’t high-scoring affairs, the Eliminators in Karachi saw a flurry of fours and sixes throughout. 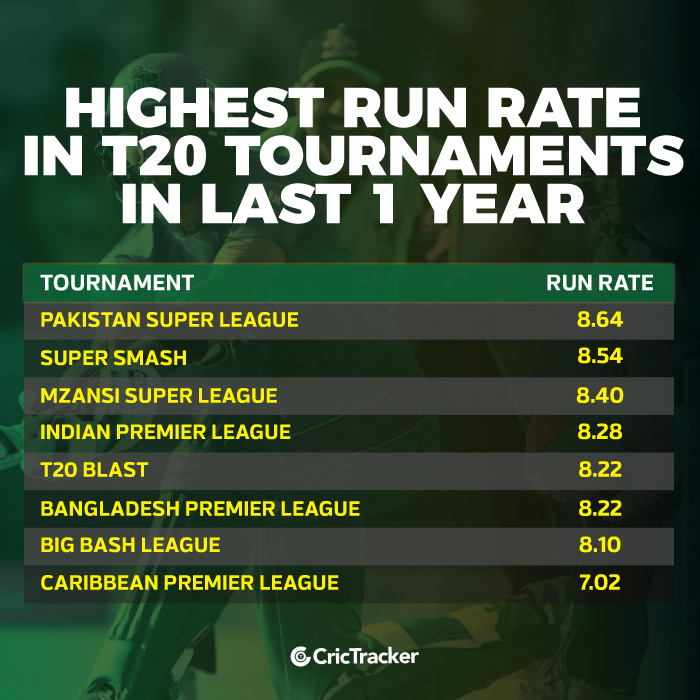