The Test match between Sri Lanka and England at Galle is Rangana Herath's final International game.

The Galle International Stadium, as always, brought the best out of Rangana Herath. It’s the same venue where he made his Test debut. Fittingly, this venue is currently hosting Herath’s final international game against the visiting England team. Rangana enjoyed loads of success at this venue which has been his most productive one in the longest format. Herath, the most prolific wicket-taker among left-arm bowlers, cemented his place only after the retirement of Muttiah Muralitharan.

Herath was introduced in the 13th over of England’s innings after the visitors elected to bat first. The tweaker soon produced a break-through for his team when he cleaned up England captain Joe Root for 35. Herath broke the 62-run stand for the 3rd wicket between Root and Keaton Jennings that came in only 13.3 overs. With this wicket, Herath, at the age of 40 years and 232 days, became the oldest player to take a Test wicket since Graham Gooch (41y 125d) in the 1994 Brisbane Test.

In these 23 years, only Sachin Tendulkar took a Test wicket after turning 40. Tendulkar was 40 years and 196 days when he claimed his last Test wicket on the first day of his farewell series against the Windies. The wicket of Root was also Herath’s 100 Test wicket in Galle. Thus, he became only the 3rd player to claim as many as 100 wickets in Test cricket at a venue. Sri Lanka’s Muralitharan claimed over 100 wickets at three different venues at home.

Most wickets by a player at a venue in Test cricket: 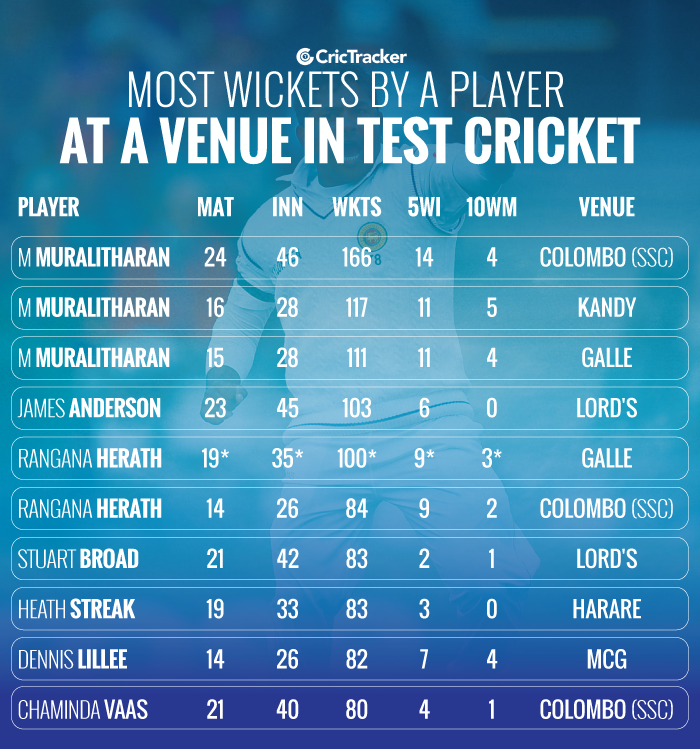