Rohit scored 95 off 92 deliveries with seven fours and two sixes.

Rohit Sharma had a few tough games in the last couple of months as he missed out on big scores in both ODIs and T20Is. The vice-captain of the Indian limited-overs team started the year with a brilliant ton against Australia but failed to score one in the next ten ODI innings. In the ongoing 5-match home ODI series against Australia, Rohit aggregated only 51 runs in first three matches. He also bagged a duck in the 2nd game which is his first in this format at home.

In a crucial 4th ODI in Mohali, he stitched on a record stand with his opening partner Shikhar Dhawan. The duo hasn’t been among big runs recently and put the failures behind to lay the platform for a 300+ total with this game. The pair added 193 runs in 31 overs for the first wicket before Rohit was dismissed on 95 attempting another big hit. The 31-year-old hit seven fours and 2 sixes during his 92-ball 95.

When Rohit got to the score of 52, he completed 3000 runs in the ODI cricket in India. He thus became only the 9th player to score as many runs in this format in the country. The right-hander reached the milestone in only 57 innings; the fastest among the nine. Virat Kohli was the previous fastest to 3000 ODI runs in India taking 63 innings. Overall, Rohit is the 37th player to score 3000 ODI runs in a specific country.

Fastest to 3000 runs in a country in ODI cricket: 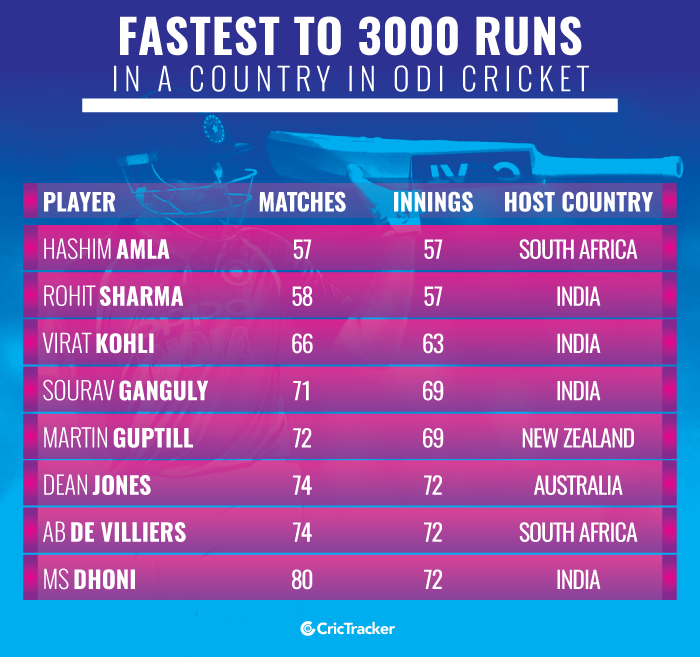