Rohit Sharma was on 8996 runs in ODI cricket before the Bangalore ODI.

2019 was a memorable year for Rohit Sharma with the bat especially in the ODI cricket where he scored more runs than any other player. Rohit smashed seven hundreds throughout the year; all coming against seven different opponents. He smashed five of those in the World Cup hosted by England making him the first player with five tons in an edition of CWC. All these efforts helped Rohit to win the ICC Men’s ODI cricketer award; his first-ever ICC award.

Rohit’s 2020 began against two below-par scores against Australia in the 3-match ODI series at home. He scored 10 runs in the first ODI at the Wankhede and 42 runs in Rajkot on Friday. In both the matches, Rohit was dismissed trying to accelerate early in the innings. However, that didn’t stop him breaking records as he completed 7000 ODI runs as an opener in Rajkot. He broke the record held by Hashim Amla to complete the quickest player to the milestone.

The Indian opener made a good start in the ongoing decider ODI in Bangalore. He started off the 287-run chase with a couple of runs on the first two balls of the innings. With those four runs, Rohit Sharma completed 9000 runs in the ODI cricket. He thus became only the 7th Indian and overall the 20th player to reach 9000 ODI runs. Rohit got to this milestone in only 217 innings which makes him the 3rd quickest to get there.

Virat Kohli stands firmly on the top having reached 9000 ODI runs in 194 innings while AB de Villiers got to this milestone in 205 innings. Rohit pushed Sourav Ganguly to No.4 in this list as the current BCCI President completed 9000 ODI runs in 228 innings by hitting a six at the iconic MCG. The bulk of Rohit Sharma’s runs came since 2013 only when he was made the regular opener for the Indian team in the 50-over format.

In January 2013, the Mumbai batsman completed 2000 ODI runs in his 82nd innings; the then 3rd slowest Indian to the milestone. Rohit Sharma has a realistic chance of becoming the second-fastest to 10000 runs in this format by bettering Sachin Tendulkar (259 innings). The current Indian skipper Virat Kohli stands on the top as he needed only 205 innings. Rohit Sharma has 41 innings to score 1000 runs and become the 2nd quickest to 10,000 ODI runs. 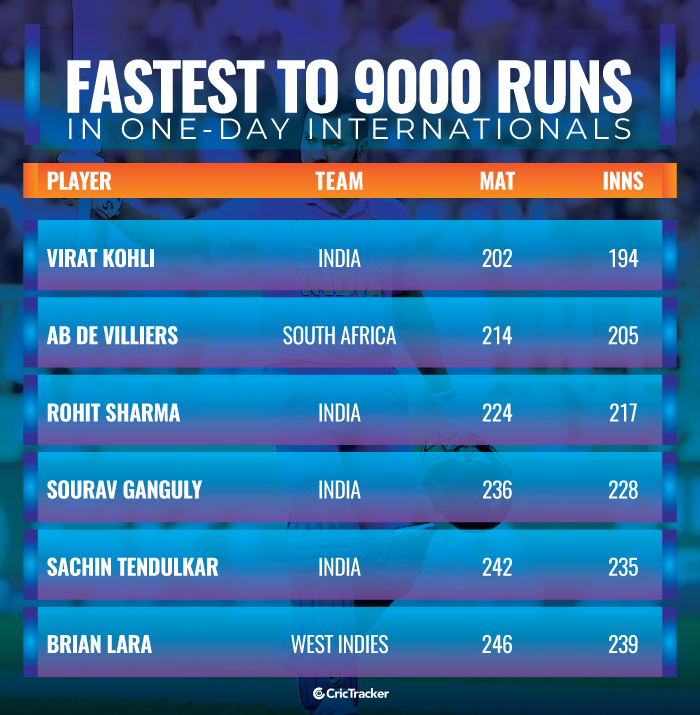