Rohit Sharma came into the Asia Cup 2018 with an added responsibility of leading the team and ensured that he gave his best with the bat on India’s way to the final. After scoring only 23 in the first against Hong Kong, Rohit struck a 36-ball fifty against Pakistan. He followed it with an unbeaten 83-run innings against Bangladesh to open their account in the Super-4s stage. In the second encounter against Pakistan, Rohit once again anchored the chase along with Shikhar Dhawan.

Rohit ended up scoring an unbeaten 111 to see India through in the 238-run chase with nine wickets in hand. He hit as many as four sixes during his 119-ball stay. This hundred was Rohit’s first in 15 ODI innings against Pakistan. The opening batsman had as many as six fifties before this game against the arch-rivals but failed to convert them into three digits. He thus became only the 3rd Indian to score three fifties in a row in the Asia Cup.

Rohit is overall the 12th player to achieve this feat with two from the Bangladesh-Afghanistan match joining the Indian skipper in this list. Imrul Kayes completed a hat-trick of fifties in the Asia Cup on his return to the ODI team while batting in the middle-order. Interesting fact about Kayes’ feat is that the left-hander had those three fifties in three different editions. He scored one in his last innings of the 2010 edition and one in his only game in 2014.

Afghanistan’s Hashmatullah Shahidi has been consistent throughout this Asia Cup and scored his 3rd straight fifty of the tournament. He nearly got to a well deserved century against Pakistan. Rohit is also the only 2nd captain to score three consecutive fifties in the Asia Cup. Sri Lanka’s Arjuna Ranatunga achieved this feat in the 1997 edition.

Most consecutive fifties in the Asia Cup: 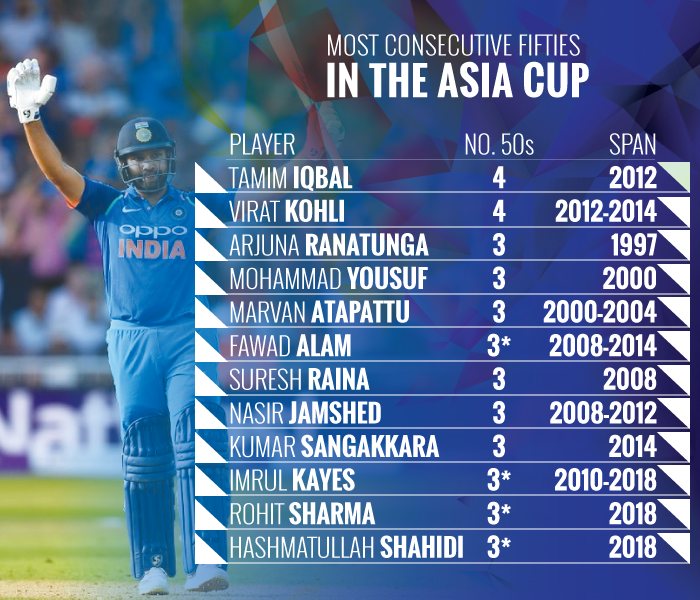