Amongst the teams with most defeats, RCB also has most wins.

Royal Challengers Bangalore (RCB) showed a brief resurgence in the Indian Premier League (IPL) 2019 after a devastating start of six consecutive defeats. They won four of their next five games to survive in the race for the playoffs. However, Virat Kohli’s side slumped to their eighth loss of the tournament on Sunday when a strong-looking Delhi Capitals (DC) beat them by 16 runs in a home game.

The defeat virtually throws the RCB out of the tournament for they can now go to a maximum of 12 points. Chennai Super Kings (CSK) have already made the playoffs while the Capitals made it by winning the game against the RCB. The Bangalore franchise also gained possession of a dubious record of losing the most number of games as an IPL team. They lost their 100th match on Sunday and are ranked the third worst T20 side in terms of defeats, after the two English county sides of Middlesex (112) and Derbyshire (101).

However, while the two English sides made their respective debuts in the year 2003, five years before RCB’s maiden appearance, the Indian club has won more number of matches than either of them. The RCB have 89 wins under their belt out of 194 games (success rate of 45.87 per cent) while they tied two and had three games that were without results. Middlesex and Derbyshire have 61 wins out of 181 games and 57 out of 165 matches, respectively.

Capitals (formerly known as Daredevils), who handed RCB their 100th defeat, are the second worst-ranked in terms of losses (98 from 181 games) while Kings XI Punjab follow next with 93 losses from 178 matches. Kolkata Knight Riders, who had a good start in the tournament but lost the plot midway suffering six straight losses, is the fourth worst team in the IPL with 88 defeats from 191 matches.

Among other teams with high number of defeats worldwide are Somerset (92 losses), Durham (90) and Worcestershire (88).

Here is the list of teams with most losses in T20 cricket: 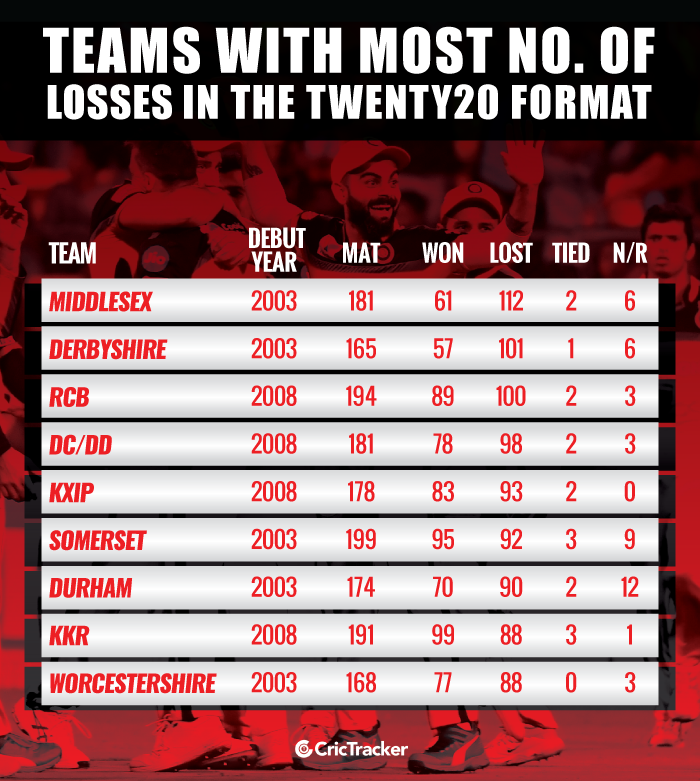