R Sanjay Yadav made his debut for Meghalaya at the start of 2019/20 season.

Meghalaya had recorded memorable wins through the 2019-20 season that began by defeating Assam and Mumbai in the Syed Mushtaq Ali T20 tournament. They won three games apiece in the Vijay Hazare Trophy and Mushtaq Ali T20 before winning as many as five matches in the Ranji Trophy. One of the major reasons for Meghalaya’s success during this season was R Sanjay Yadav’s all-round show. He recorded bowling figures of 4-2-14-2 in the win against Assam and scored a 44-ball 55 when they stunned Mumbai at the Wankhede.

Sanjay aggregated 200 runs and took five wickets across the 7 matches during the SMA T20. He also claimed nine wickets and scored 127 runs with a fifty in Vijay Hazare. Sanjay Yadav produced record-breaking efforts with both bat and ball during the Ranji Trophy. This was his debut Ranji season and also his first for Meghalaya. Sanjay was born in Uttar Pradesh before moving to Tamil Nadu where his exploits in TNPL helped him earn 10 T20 caps across 2016/17 and 2017/18.

Sanjay Yadav registered figures of 9/52 against Nagaland on his first-class debut which are the 7th best for any player on FC debut. He claimed four more wickets to end the match with figures of 13/112 as Meghalaya won the game by 110 runs. Sanjay picked up only three wickets in the following two matches where his team suffered innings defeats. He bounced back with 8/30 and 2/31 during a low-scoring match against Puducherry. His efforts went in vain as Meghalaya lost the match by 5 wickets.

In the next match, Sanjay Yadav scored his maiden century against Mizoram smashing 13 sixes and 23 fours on his way to an unbeaten 254 off 228 balls. The 24-year-old was involved in a record 440-run stand with D Ravi Teja for the 5th wicket. He bagged six wickets in this match as Meghalaya won it by an innings and 425 runs which is the 3rd biggest win for any team in Ranji Trophy by an innings margin. Sanjay Yadav got 2nd straight man of the match award as he claimed 11 wickets in Meghalaya’s innings win over Manipur.

He registered his 5th 5-wicket haul against Sikkim and claimed 7 wickets in the last match of the season with which he completed 50 wickets in the tournament. With Meghalaya not qualifying to the knockouts, Sanjay Yadav ended Ranji Trophy 2019-20 with 603 runs and 55 wickets. He thus became only the 2nd player in the history of Ranji Trophy to claim 50+ wickets and score 500+ runs in a season. Sunil Joshi in 1995/96 season registered this all-round double while representing Karnataka. 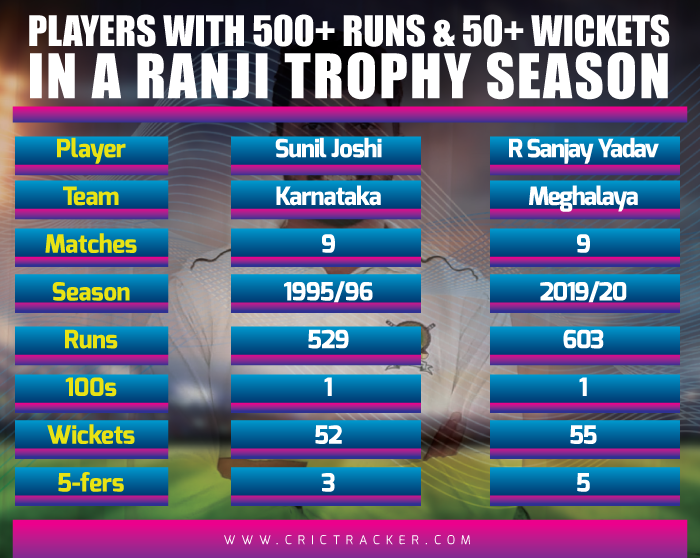