In the overall list though, Dhawan has 5 batsmen ahead of him.

Indian opener Shikhar Dhawan since his comeback to the Indian team in the Champions Trophy 2017 has been in rich form. He was awarded the Golden Bat for being the highest run-scorer in the tournament. During the third and final ODI of the series against Sri Lanka which was his 95th inning in this format, Dhawan completed 4000 ODI runs when he took a single on 61.

Thus the left-hander entered the 4000 run scorer’s club as the second fastest among Indians. He got there quicker than some of India’s best limited-overs batsmen. The list includes the likes of former Indian captain Sourav Ganguly who scored his 4000th run in the 105th inning, Navjyot Singh Siddhu took 109 innings to get there, former opener Gautam Gambhir got past the mark in his 110th inning while the Master Blaster Sachin Tendulkar had 4000 runs in his account after batting in 112 innings.

2017 has proved to be a very productive year for the left-hander as he played 22 matches this calendar year and scored 925 runs with the best score of 132*. He has an average of 47 and scored 2 hundreds and 7 fifties this year.

Indian batsmen fastest to 4000 ODI runs (in terms of innings):

In the overall list though, Dhawan has 5 batsmen ahead of him. Leading the list is South Africa’s Hashim Amla who scored 4000 runs in 81 innings, following him is the legend Vivian Richards – 89 innings, England’s Test captain Joe Root places himself third having got to the milestone in 91 innings, Virat with 93 comes next and then there is the dangerous David Warner who also achieved the mark in 93 ODI innings.

Batsmen fastest to 4000 ODI runs (in terms of innings): 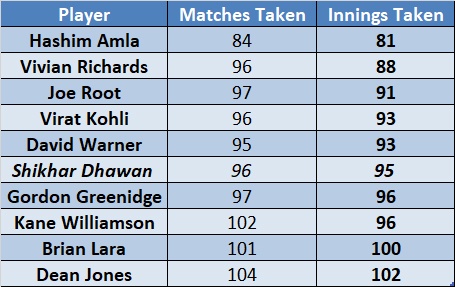