Shoaib Malik made his ODI debut in October 1999 against the Windies.

From starting his International career at the age of 17 as an off-spinner and a lower-order batsman, Shoaib Malik has gradually evolved and turned into a batsman who can bowl a couple of overs. Malik’s role in the Pakistan team kept changing and his position within the team. Despite playing for nearly two decades for the national team, Malik featured in only three World Cup matches the last of which came in 2007.

However, he is going to be a handling the crucial No.4 spot for Pakistan in the forthcoming World Cup in 2019. Malik has been one of the most consistent middle-order players around since his comeback to the International scene in 2015. His form has been one of the main reasons for Pakistan’s recent success in the limited-overs cricket. This helped the 36-year-old to extend his International career for more than 19 years.

Longest career for a player in ODI cricket: 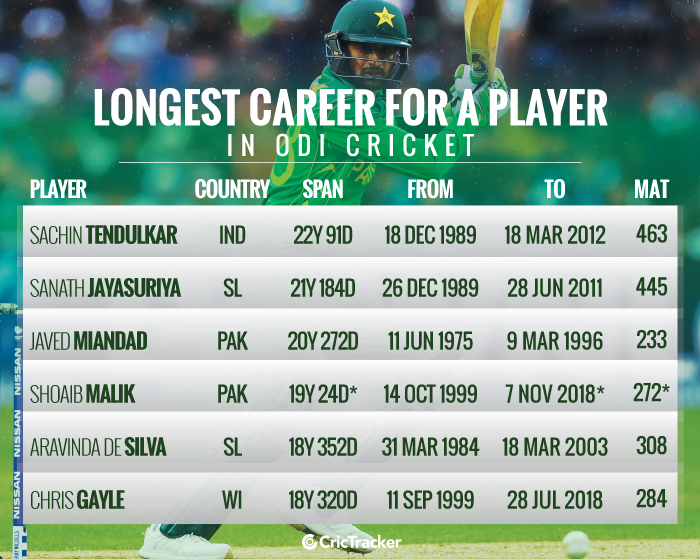 Malik’s ODI debut came in October 1999 against the Windies. By featuring in the first ODI game against New Zealand on Wednesday, he became only the 4th player to extend his ODI career for 19 and more years. India’s Sachin Tendulkar featured in 463 ODI matches across 22 years from 1989 and 2012 which is a record. Sri Lanka’s Sanath Jayasuriya’s ODI career was only one year less than that of Sachin. Javed Miandad is the other Pakistani player to appear in the list as his ODI career lasted 20 years and 272 days long.

Chris Gayle has a chance to join this list if he manages to play the 2019 CWC in England. Overall, Shoaib Malik is the 5th player from Pakistan whose International career lasted for 19 and more years. Shahid Afridi holds the Pakistan record as his career was spread over 21 years and 241 days. Afridi consisted of a couple of retirements and comebacks. His last International game was for the World XI against the Windies nearly two years after his last International game for Pakistan.

Longest career in International cricket for a Pakistan player: 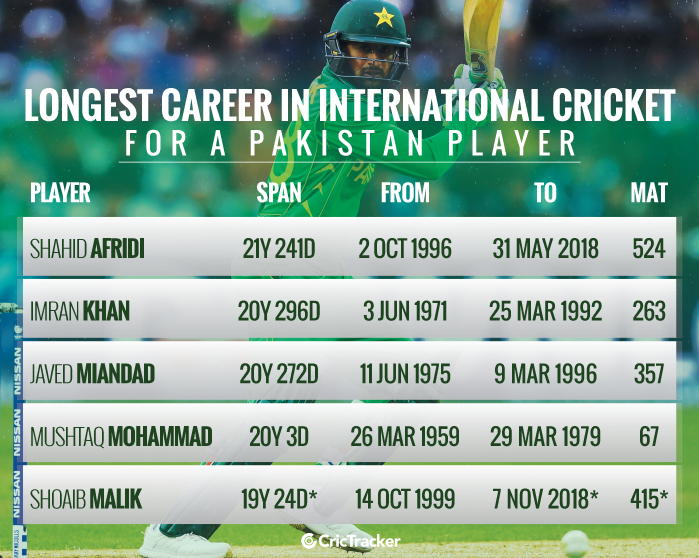