The St Lucia stars failed to win a single game during the last season where they lost nine of the ten matches.

St Lucia Stars finally ended their 2-year drought for a victory when they defeated Barbados Tridents on Friday in their 5th game of the 2018 Caribbean Premier League (CPL). The St Lucia stars failed to win even a single game during the last season where they lost nine of the ten matches they played with another game ending without a result. Their last win came in the 2016 season when they were named St Lucia Zouks. The drought began when they went down in the Eliminator game in that season.

St Lucia team went through 15 matches without a win which is the joint 5th longest streak in the Twenty20 history. That streak finally came to an end thanks to their captain Kieron Pollard’s maiden century in the shortest format. Despite three batsmen getting out for a duck, the home team reached a big total of 226/6. Rahkeem Cornwall struck a 11-ball 30 in the powerplay while Andre Fletcher anchored the innings with an 80-run knock that came off 52 balls.

Pollard, in his 427th T20 game, scored his first T20 century as he made 104 from 56 balls with eight sixes. Chasing the big total, Barbados Tridents made only 188/6 and lost the game by 38 runs. The St Lucia Stars team wasn’t any better when they were named by ‘Zouks’ before 2017. The franchise has won only 15 out of the 52 T20 matches they played thus far losing 35 the remaining two were washouts. 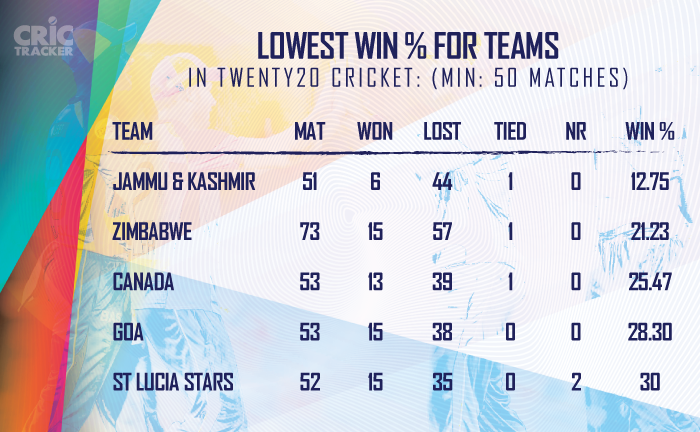 St Lucia Stars/Zouks’ win percentage of 30 is the 5th worst for any team that played a minimum of 50 games in Twenty20 history. Jammu and Kashmir’s win% of 12.75 is the lowest in this format as they won only six of the 51 matches they played. St Lucia’s win percentage is the 2nd lowest for a franchise team in this format. Pune Warriors, the abandoned Indian Premier League (IPL) franchise, had a win percent of 26.67 having won only 12 of their 46 matches. 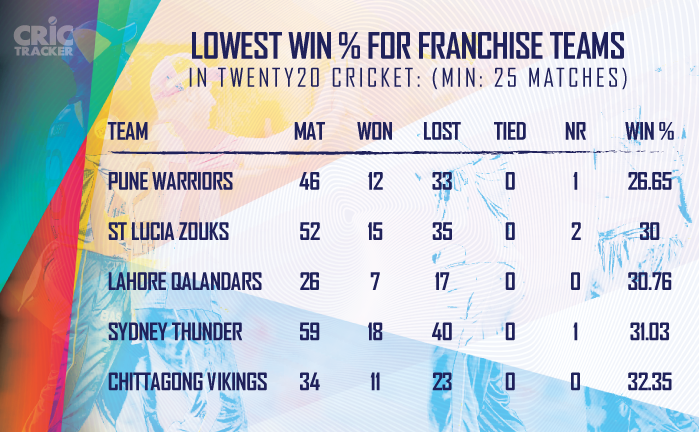