David Warner’s 130 off 119 against Pakistan today in the 4th ODI of the ongoing five-match series got him into the list of players who scored fastest 12 ODI centuries. This is his eighth ODI century in 12 months that led Australia to post a mammoth target of 353/6. Pakistan needed to pull off their highest successful ODI chase in Australia. The SCG stood up in appreciation of their home boy’s brilliant knock.

First combining for a 92-run opening stand with Usman Khawaja and then stitched a 120-run partnership along with Steve Smith that put Australia on the front foot at 212/1 by the 36th over. With this knock, he became the 3rd fastest batsman to score 12 ODI centuries as he did it in just 90 innings.

The fastest in the world is one of the best ODI players, Hashim Amla who took only 81 innings to register 12 ODI tons. Indian skipper Virat Kohli is the fastest Indian and the second fastest in the world to hold that record with 83 innings. There’s always a quiet contest between the two for most of the records for fastest ODI centuries.

Amla holds the record for being the fastest cricketer to reach 16th, 17th, 18th, 19th, 20th, 21st, 22nd and 23rd centuries in ODIs. It’s particularly interesting between the two as Kohli either breaks the record for a specific number of ODI centuries that was in the name of Amla or it continues to remain in his name. Hashim Amla registered his 12th ODI ton against India in Durban in 2013 while Virat registered his 12th ODI century at Colombo in 2012.

Marcus Trescothick is the only English player to feature in the list with 12 ODI centuries in 119 innings. He is the 4th fastest to do so. Upul Tharanga, the Sri Lankan batsman features at No. 5 with 119 innings as well. Former Pakistan opener Saeed Anwar’s 12 ODI centuries in 120 innings make him the only Pakistani batsman to find his name in this list.

Herschelle Gibbs and AB de Villiers, both from South Africa, with 12 ODI centuries in 120 innings each make it at 7th and 8th respectively. Brian Lara is the only Caribbean to earn a spot with 124 innings. Sourav Ganguly is the second Indian to feature in the records with 130 innings and remained the fastest Indian to reach 12 ODIs before Kohli diminished it.

At the moment, only 4 players are active ODI players with many other records in their name. They are Amla, Kohli, Warner and de Villiers.

Here is the list of top 10 Batsmen fastest to 12 ODI centuries: 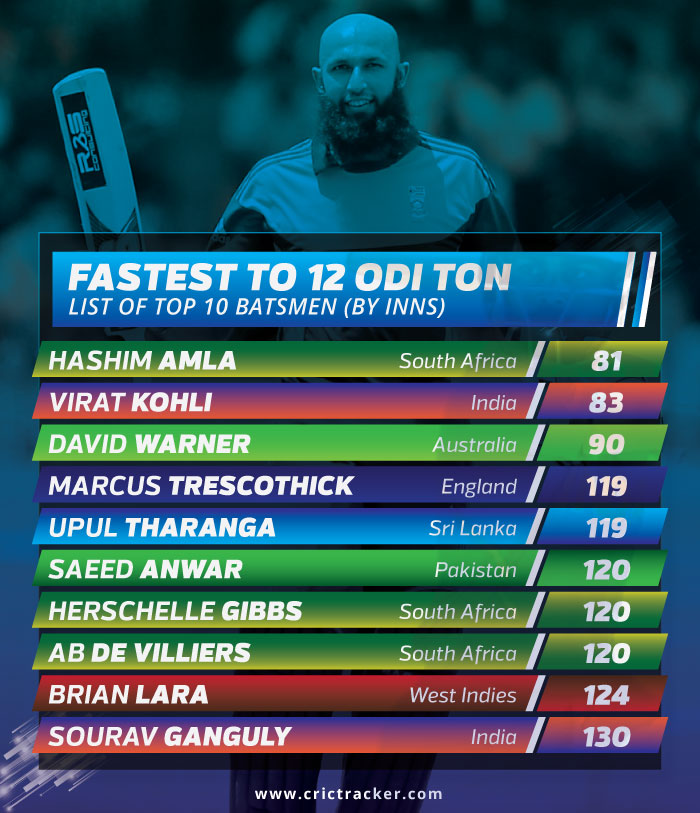