Umesh Yadav made his T20I debut in July 2012 which was also his last appearance in this format.

A golden season with the ball in the Indian Premier League (IPL) brought back Umesh Yadav in the mix of India’s limited-overs squads for the Europe tour. The speedster was slowly sidelined from the ODI squad with the success of Bhuvneshwar Kumar and Jasprit Bumrah in the last 18 months. Umesh was India’s leading wicket-taker with 18 wickets in the 2015 World Cup and finished only behind Mitchell Starc and Trent Boult who took 22 wickets apiece.

Below-par performances in the bilateral series’ after the ICC event cost Yadav his position in the ODI side restricting him to home Test matches. But 20 wickets in the 14 games in this year’s IPL under the Indian skipper Virat Kohli brought him back into the ODI and T20I squad in the ongoing Europe tour. Bowling express pace and taking wickets in the powerplay saw Yadav succeed and make an Indian comeback.

As Team India decided to rest both their pacers Bhuvneshwar and Bumrah in the 2nd T20I against Ireland, Yadav made it to the playing XI along with the debutant Siddarth Kaul. This is only the 2nd appearance for the Saurashtra pacer in the T20I format. He made his T20I debut in the one-off game against Sri Lanka in 2012 and had to wait nearly six more years for his 2nd T20I game. In this span, India played three World T20s and as many as 65 matches.

Here are the players who missed most consecutive T20Is between two appearances for India: 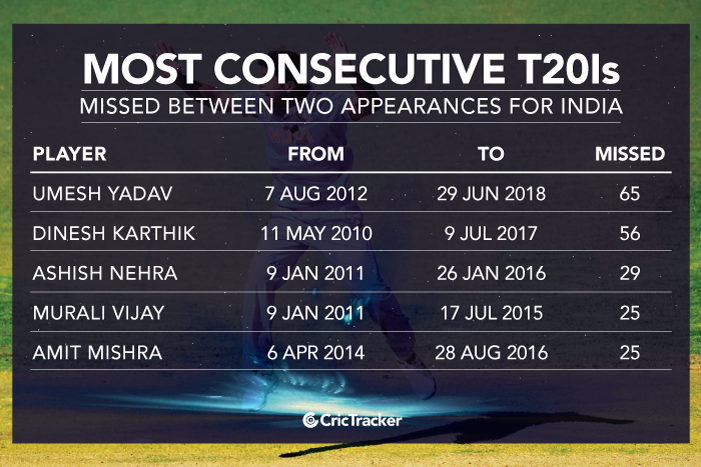 The 65 consecutive matches Umesh missed are the most by any Indian player between two T20I appearances. Dinesh Karthik held the record when he made it to Indian XI during the T20I against Windieslast year. Karthik missed 56 T20Is played by India between the 2010 WT20 and the 2017 game in the Caribbean.

The 65 matches Umesh missed are also the 5th most by any player between his two appearances in the T20I format for his country. The record is held by England’s Liam Plunkett who made his T20I debut in 2006 and played his 2nd T20I in 2015 after a 9-year wait. Sri Lanka’s Mahela Udawatte came close last year when he made a comeback into T20I cricket after eight years.

Here are the players who missed most consecutive T20Is between two appearances for a team: 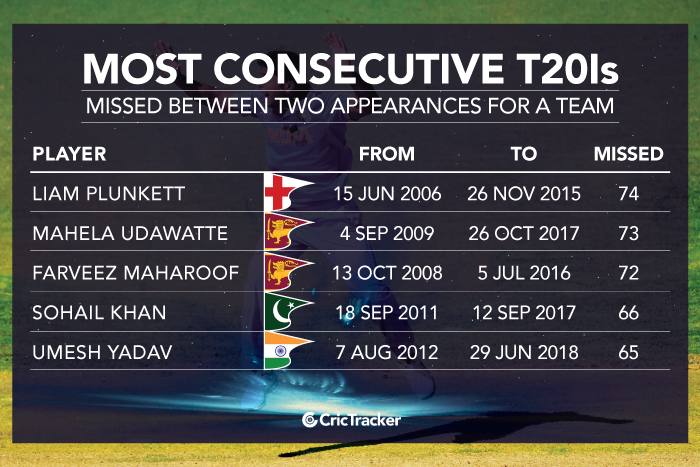