Stats: Virat Kohli becomes the first player to play 200 matches for a team in T20 cricket

Stats: Virat Kohli becomes the first player to play 200 matches for a team in T20 cricket

The moment Royal Challengers Bangalore (RCB) skipper Virat Kohli took the field on Thursday against Kings XI Punjab (KXIP), he added yet another feather to his cap. Kohli became the first player in T20 cricket to play a whopping 200 matches for a single team. Ever since the inception of the Indian Premier League (IPL), he has played for RCB and has cleared that he has no intentions of leaving the franchise any time soon.

Although he has played 185 matches for RCB in the IPL, not many are aware that on 15 occasions, he represented the team in the now-defunct Champions League T20. In those matches, he scored 424 runs while in the IPL, Kohli has amassed more than 5600 runs and is the highest run-getter in the IPL ever. He has been leading the franchise over the last seven years and will be keen on winning the trophy this year.

England’s James Hildreth is the next in the list of most matches played for a single team in the shortest format of the game. He has represented Somerset in 196 matches so far scoring 3694 runs with 16 half-centuries and a century to his name. The third player on the charts is the Chennai Super Kings (CSK) skipper MS Dhoni having featured in the yellow jersey on 198 occasions.

Dhoni has so far amassed 4565 runs and has led CSK to the trophy three times being the second successful captain of the IPL ever. CSK has also made it to the playoffs in all the 10 seasons they’ve played under Dhoni. However, the ongoing edition is the litmus test for the team as all the odds are against them. Even Suresh Raina is at the fifth place in this list playing 188 matches for the same team.

He would’ve crossed the 200 matches mark in this season if the left-hander hadn’t pulled out of the tournament. England all-rounder Samit Patel has played the fourth most matches, 191, for a single team in T20 cricket. He was part of the Nottinghamshire even in the recently concluded T20 Blast and looks set to play nine more matches in the next season as well. Rather he won yet another T20 tournament with the Notts this year.

Players to play most T20 matches for a single team: 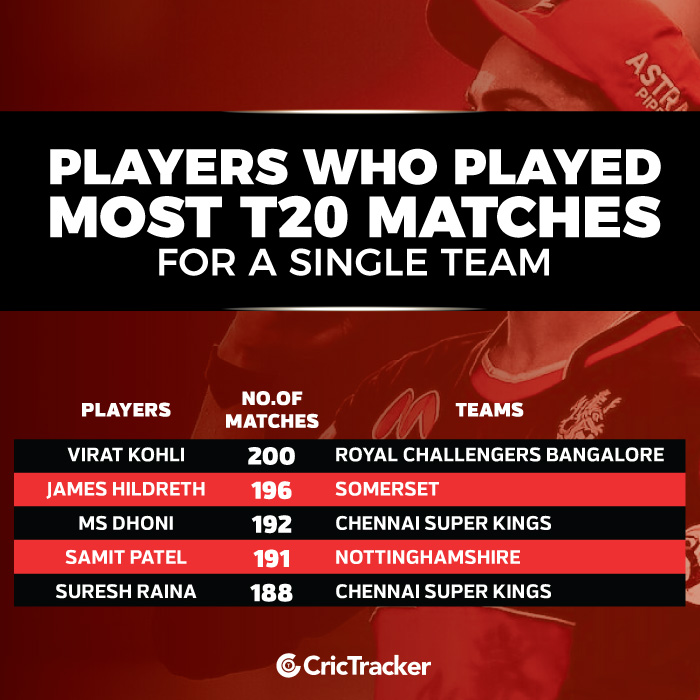