Virat Kohli has turned out to be a run-machine in the Test cricket ever since he took up the captaincy in 2014/15 and took giant strides towards becoming a legend in this format. Kohli began the two-match Test series against the Windies with this 24th Test century as India posted over 500 runs in their first innings. Kohli was stranded on 999 runs in the longest format this year at the Lunch interval on the second day. He completed the milestone with a boundary on the first ball he faced after the resumption.

Kohli alone has done it three times in four years of after becoming the full-time Test captain of India. He also became the first Indian to score 1000+ Test runs in three consecutive calendar years. Sunil Gavaskar and Tendulkar are the only Indians to score 1000 test runs in back to back calendar years. Overall, Kohli is the 6th player with 1000 runs in three consecutive years in Test cricket but the first one from Asia to achieve this feat.

Australia’s Matthew Hayden was the first to do it that too in five consecutive calendar years between 2001 and 2005. Steven Smith had 1000+ Test runs in four consecutive calendar years between 2014 and 2017 that saw him clinch the No.1 spot until he was suspended for the ball-tampering scandal. Smith had a great chance to level Hayden’s feat but the Cricket Australia’s ban ensured he didn’t play more than five Tests in 2018. 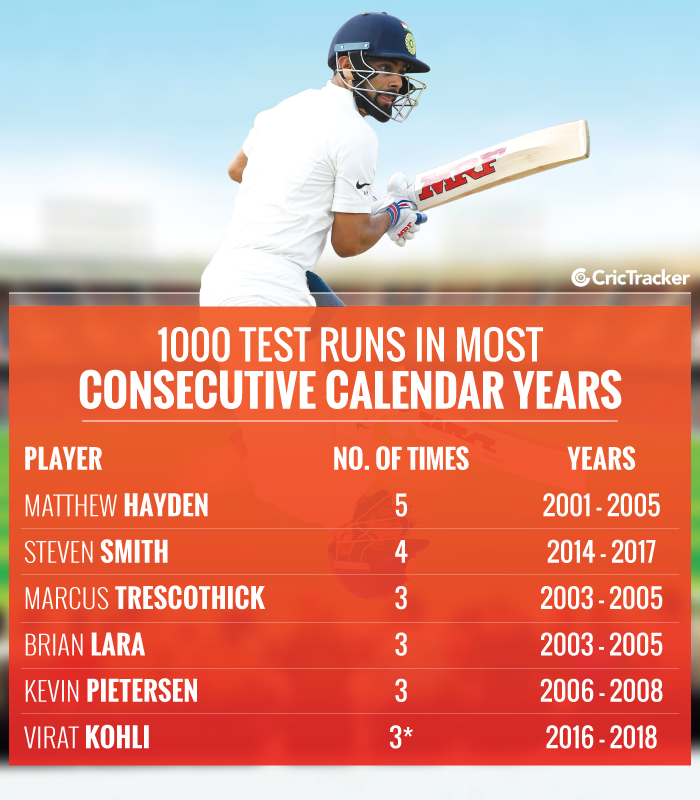