Kohli remained unbeaten until the end to score 157 runs as India posted 321 runs on the board.

Virat Kohli is always busy creating records. On Wednesday, the right-hander became the proud owner of yet another record. It was in the 38th over of the second ODI against the Windies in Vishakhapatnam that Kohli stepped out of the crease against spinner Ashley Nurse and drove to long on to become the latest member of 10,000 runs in the 50-over format.

The batsman, who will turn 30 on November 5, is the fifth Indian and 13th overall to become a member of the elite club and is by far the fastest to reach the milestone. Kohli completed 10,000 runs in 213 matches and 205 innings. He took just 11 innings to reach 10,000 from 9,000 runs and in the process, smashed the record of the great Sachin Tendulkar who was the previous fastest to enter the club in 266 matches and 259 innings.

Tendulkar is the top scorer in the ODI list with 18,426 runs in 463 matches at an average of 44.83 with 49 centuries and 96 fifties while Kohli averages 59.11 at the moment and has 37 tons and 49 half-centuries to his name till the second ODI in Vishakhapatnam. He now has 61 international centuries and is only 39 away from equalling the great Tendulkar in terms of the number three-figure scores across all the formats.

Virat Kohli didn’t stop even after reaching his century and slammed runs for fun eventually staying unbeaten on 157 as India posted a mammoth total of 321 runs in 50 overs. 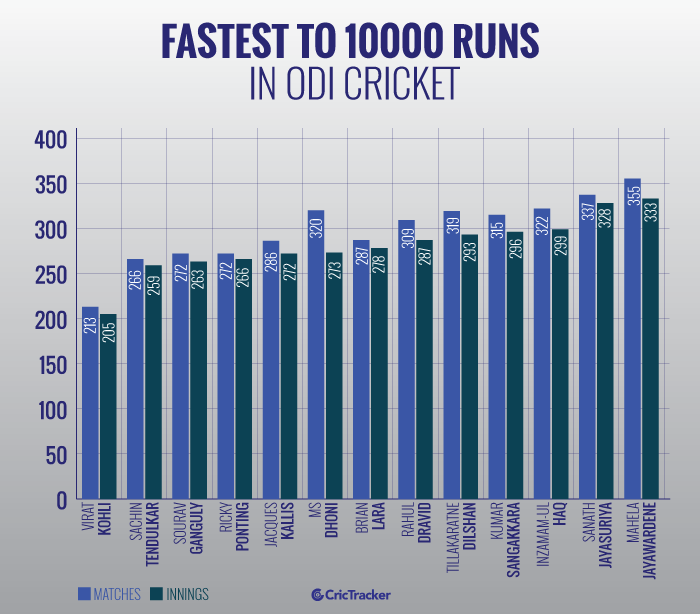