He remained unbeaten on 120 off 215 deliveries with seven fours at the Lunch interval.

Runs continue to flow from Virat Kohli’s bat as the Indian captain began the two-match Test series against the Windies with a century. This was Kohli’s first home Test in 2018 but already scored three Test centuries this year in the eight Tests played across South Africa and England. Coming into bat at 209/2, Kohli shared century stands with the vice-captain Ajinkya Rahane for the 4th wicket and a 133-run stand for the 5th wicket with wicketkeeper Rishabh Pant.

He remained unbeaten on 120 off 215 deliveries with seven fours at the Lunch interval taking India past the 500-run mark. It was one of the rare centuries for Kohli when he did not score many runs in boundaries. The Indian captain scored only 23.33% of his runs in this innings through boundaries. This was his 24th century in the longest format with 17 of them coming while leading the Indian team.

With this century, Kohli moved on to the fourth position in the list of players with most centuries in Test cricket for India. In this process, Kohli surpassed his state-mate Virender Sehwag who scored 23 Test tons. He is now only behind Sachin Tendulkar (51), Rahul Dravid (36) and Sunil Gavaskar (34). The Indian skipper is the 24th player in overall to score as many as 24 Test centuries but is only the second fastest to get there taking only 123 innings.

Sir Donald Bradman occupies the top stop firmly, taking only 66 innings for notching 24 Test centuries. India’s Sunil Gavaskar was second best of his time taking 128 while another Indian Sachin Tendulkar went past Gavaskar taking 125 for his 24th ton. The top five players in the list of fastest players to score 24 centuries in Test cricket are either from Australia or from India. The former Australian opener Matthew Hayden scored his 24th Test ton in his 132nd innings. 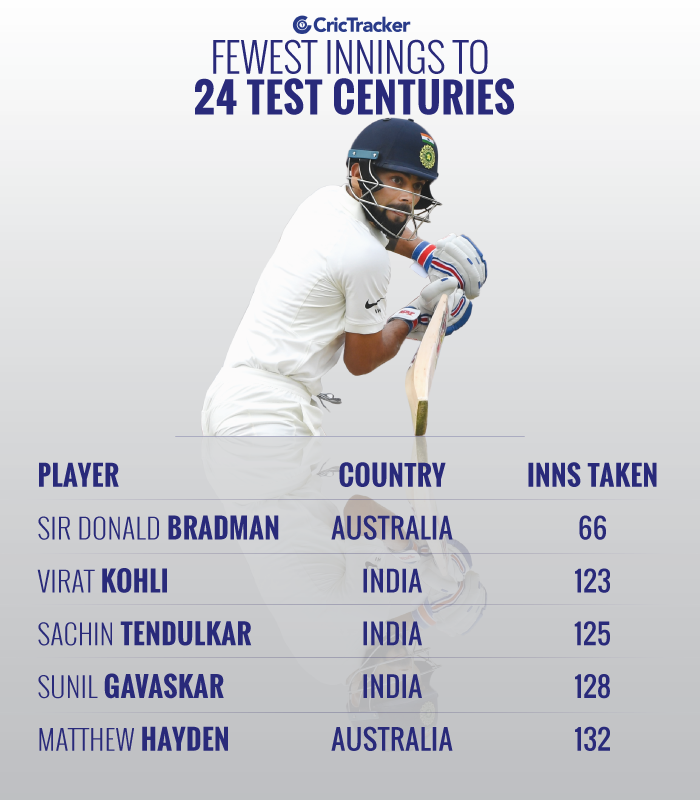