On Friday, September 4, England beat Australia by two runs to take a 1-0 lead in the three-match series. At the Rose Bowl in Southampton, the visitors, led by Aaron Finch, were cruising along at 127 for two, but succumbed to the pressure in the dying stages of the match. The Brits, on the other hand, showed nerves of steel and clinched victory from the jaws of defeat.

After the game, Eoin Morgan, the England limited-overs pacer, lauded Chris Jordon, Adil Rashid and Jofra Archer for the stupendous bowling performance. He also spoke highly of Chris Jordan, who has been a key component of England’s T20 setup for quite a few years.

“Chris Jordan has been one of our greatest ever bowlers and only sits behind Broady in the lead wicket-takers. For younger guys coming through, I think he sets a great example,” Eoin Morgan was quoted as saying, after the first T20I, by the ICC on its official Instagram.

🗣️ "Chris Jordan has been one of our greatest ever bowlers and only sits behind Broady in the lead wicket-takers. For younger guys coming through, I think he sets a great example." Eoin Morgan was all praise for Jordan after the first #ENGvAUS T20I 👏

Stuart Broad, the veteran fast bowler, also joined in. Praising Jordon, he said that the speedster can deliver under extreme pressure.

In the meantime, a fan tried to troll Broad. The fan commented on the post and wrote, “@stuartbroad8 u r best in test cricket don’t worry.”

Broad isn’t someone to die wondering while being trolled. He had a strong reply up his sleeves. He wrote, “@m.r_handsome_49 also, still England’s leading wicket taker in T20 having not played since the age of 28 cheers.”

Here’s the screenshot of the convo: – 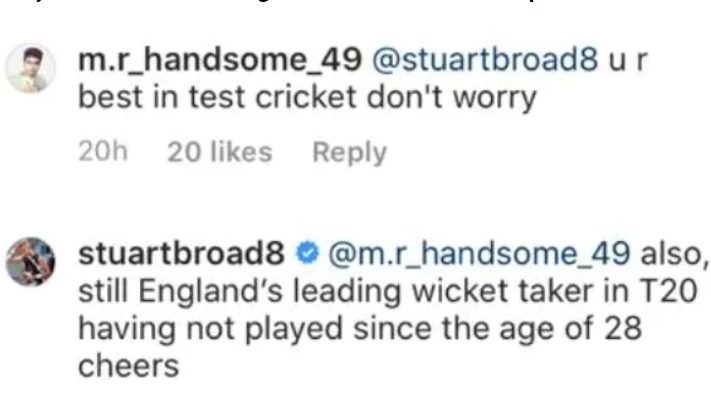 Broad, without a shred of doubt, is one of England’s greatest bowlers in Test cricket. Along with James Anderson, the 34-year-old has ruffled a lot of feathers over the years. However, his numbers in T20Is aren’t the worst by any stretch of the imagination. In fact, having last played in the format back in 2014, Broad is still their leading wicket-taker with 65 wickets from 56 encounters.

Jordon is placed second with 61 scalps from 51 games. In Test cricket, Broad has 514 wickets at an average of 27.65 with 18 five-wicket hauls and three 10-wicket hauls. As far as the ongoing series is concerned, England are leading by 2-0 with a game remaining on Tuesday. September 8.