Mitchell Marsh has started to bowl and returned with 2/14 in the last game. 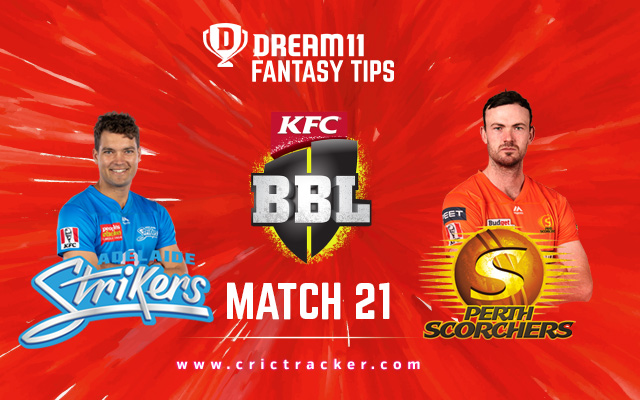 The 21st match of the Big Bash League (BBL) 2020-21 will be played between Adelaide Strikers and Perth Scorchers at the Adelaide Oval in Adelaide.

This match will start at 1:45 PM IST (6:15 PM local time). It will be live on Sony Sports Network and can be streamed live on Sony LIV.

Adelaide Strikers and Perth Scorchers will meet for the second time in three days at the Adelaide Oval in the ongoing BBL season. The Strikers thumped the Scorchers by 71 runs in the previous face-off and the Perth team will be keen on giving it back to their opposition. The Strikers have so far churned out 13 points with three wins from five matches and are at the third position in the points table.

The Scorchers, on the other hand, have succumbed to three defeats so far in four outings with the other game being washed out. They are yet to win a single game and the Scorchers will have to start winning matches soon as time is running out for them. Having played against the Strikers only a couple of days ago, they will have back themselves to make a comeback and bag crucial points.

There is no chance of rain during the match in Adelaide on the last day of year 2020. It will be sunny when the two teams will walk out on the field with the temperature expected to be in the mid-20s.

Adelaide Oval has hosted only a solitary match this season between the same two teams and the Strikers posted 165 runs batting first and then skittled the Scorchers for just 94 runs winning the game by 71 runs. Chasing doesn’t seem to be easy at the venue.

Jason Roy scored 21 off just 11 balls before getting out in the previous game. He looked in good form and is unlikely to miss out again on making a big score.

Jhye Richardson has been consistently taking wickets this season and once again picked 3/30 in the last encounter.

Rashid Khan weaved his magic in the last game scoring a 13-ball 29 and then returned with the figures of 2/18 with the ball.

Philip Salt slammed 31-ball 51 in the last game against the same team and he can be destructive again.

Mitchell Marsh has started to bowl it seems and returned with the figures of 2/14 in his four overs. He is a very good batsman and can be made captain of your Fantasy teams. It is tough to accommodate all the top players due to their high credits. You will need to pick Matt Short (8 credits) and Jonathan Wells (9 credits). Or else, you can drop one of the top players like Roy, Mitchell Marsh, Rashid or Siddle and pick the likes of Weatherald and Inglis in your Dream11 Fantasy Team.