The 6th match of the Super Smash 2019-20 will be played between Wellington and Central Districts, at the Basin Reserve in Wellington.

Central District won their opening game against Northern Knights with sheer dominance. Their batting unit did a commendable job as everyone looked in touch with the bat as they posted a mammoth total of 221 runs on the board. Later on, their bowlers also defended it successfully and helped their side in winning the match by a big margin of 120 runs. District displayed a brilliant team effort and will look to replicate the same in the upcoming match as well.

Wellington also did a convincing job in their previous match with bowlers and batsmen contributing well in their respective departments. In bowling, Jeetan Patel and Jeames Neesham did a brilliant job against Canterbury and the same would be expected from them in the upcoming game. On the other hand, their batting line up that comprises of Devon Conway, Michael Pollard and Rachin Ravindra would be needed to click if they want their side to win against the inform Districts.

There are chances of rain that might abandon the match. However, the temperature is expected to deviate between 14 and 16 Degree Celsius according to Accuweather.

The track at Basin Reserve is expected to go in favour of batsmen as far as the previous season matches are concerned. In five games played in Super Smash 2018-29, the wicket recorded one 200+ run game with three ended up with a 150 plus mark. However, the fast bowlers will get some help from the wicket but in the early phase of the match. The team winning the toss will look to bat as the teams have found it difficult to chase at this venue.

George Worker was in red hot form with the bat in the opening game against Northern Knights. He mustered 42 runs off 20 balls with five boundaries and three sixes. He can be vital for a fantasy side. Tom Burce will also be a wise pick for any Dream11 Fantasy side, who has a career average of 147.01 in T20s with 1501 runs in 67 games. Kieran Noema-Barnett is a brilliant all-rounder, who contributed well in the previous match as he grabbed three wickets and amassed 42 runs for his side and will be an important player to watch. 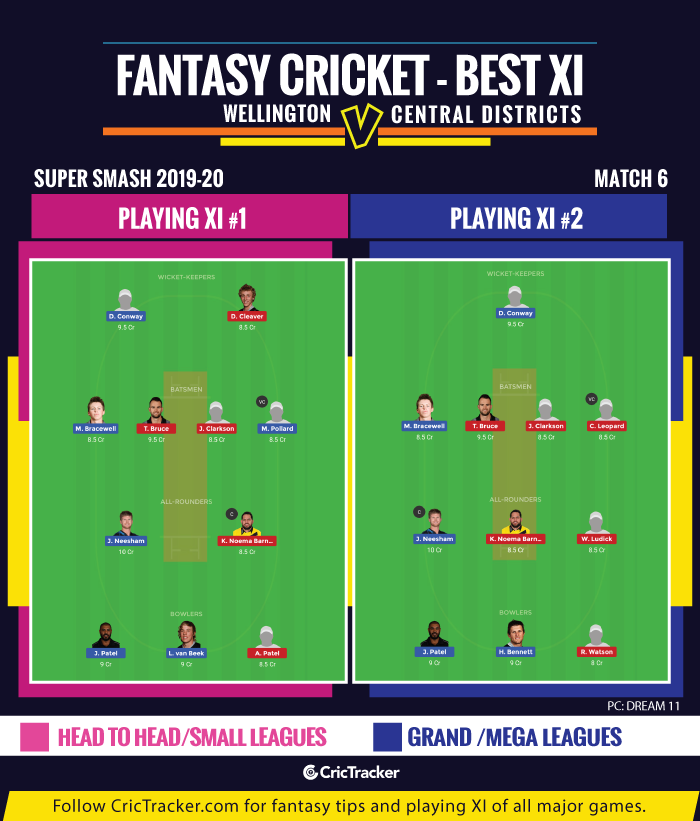 Try to pick the top order batsmen from Central Districts, who are currently in a good form with the bat and one of them might go for a big knock against Wellington on a batting-friendly wicket.

Central Districts are expected to win this match against Wellington.