Northern Knights are expected to start 2019 on a winning note with a squad that covers all bases with proper replacement players.

Northern Knights, the defending champions of the Super Smash will play their first game of 2019 when they take on the Auckland Aces. The Knights started with a big win in the high-scoring first match of the tournament against the Wellington Firebirds. However, they lost to Central Stags in the next game before ending 2018 with a convincing win against the Otago Volts. They have made four changes to the squad coming into the game against the Aces as Tim Seifert and Ish Sodhi have joined the New Zealand ODI squad.

Zak Gibson and Brett Randell also miss out from the Knights’ squad with Peter Bocock, Neil Wagner, Chris Jordan and Tarun Nethula coming for those to fill the 12-man squad. On the other hand, the Auckland Aces had their first game washed out. They got the better of the Central Stags before going down to the Canterbury Kings on the New Year’s Day as Kyle Jamieson ran through with a 6-wicket haul. The Aces will be taking on the Knights with an unchanged squad.

The 10th match of the Super Smash T20 2018-19 will be played between Northern Knights and Auckland Aces at the Seddon Park in Hamilton.

There will be no official broadcast for this match. The 12th game of Super Smash will be telecasted live.

The Seddon Park is expected to produce a high-scoring pitch like it did at the start of the season. The Knights posted 215/6 while batting first and won the game by 45 runs. An average score of around 180 has been recorded in the previous six Twenty20 games at this venue. The teams batting first made 190+ in four of those six matches. The spinners are expected to hold the ball as the game goes through.

Donovan Grobbelaar is in line for his first match of the season ahead of Sean Solia. The pace all-rounder is too good to be kept out of the team. He has scored 435 runs across 36 T20 innings and bagged 47 wickets from 53 matches in the Twenty20 format. After the batting failure in the previous match, Grobbelaar could get a chance to bat at No.6-8.

Once again, Anton Devcich will be the most valuable multiplier option as he will open the innings for the Knights and bowl four overs too. The likes of Daryl Mitchell, James Vince and Mitchell Santner are capable of filling one of the multiplier’s role. Anyone of the Auckland bowlers can be made the vice-captain too. 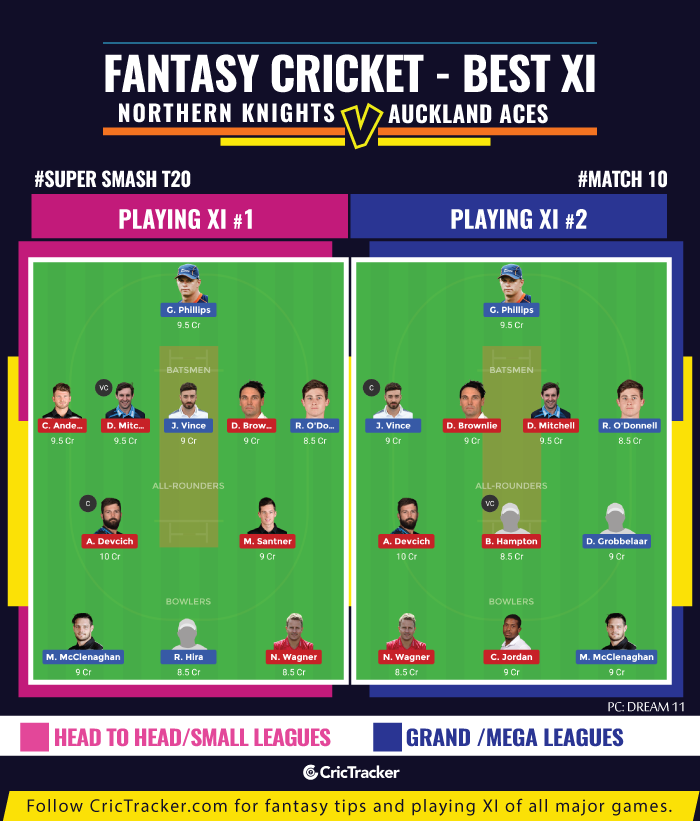 Glenn Phillips, despite his poor form, makes it to the XI as he is the only player from keepers’ category who is sure of his spot in the team. For picking up both Devcich and Santner from the all-rounders category, any one of the batsmen with nine credits has to be left out.

Northern Knights are expected to start 2019 on a winning note with a squad that covers all bases with proper replacement players.