Wellington Firebirds will start as favourites but the game will not end without a real fight from the Canterbury Kings.

Wellington Firebirds will take on the Canterbury Kings on Sunday which will be one of the three Super Smash matches played in the day. The Firebirds had to wait until their 4th match to find the winning ways. They lost to Northern Knights by 45 runs while their second game was a washout. They lost to Otago by a one-run margin from a winning position before getting better of the Central Districts to end 2018 with a win. The Canterbury Kings, on the other hand, have won one and lost one thus far.

Their campaign started with a 5-wicket defeat to Otago but they began 2019 with a similar win over Auckland Aces. In the first T20 game of the new-year, Kyle Jamieson picked up six wickets for seven runs in his four overs to register the 3rd best bowling figures in this format and the best by a New Zealander. The Canterbury Kings ensured they didn’t make changes to their winning side. Wellington left Troy Johnson out of the squad to reduce it to a 12-man squad.

The 12th match of the Super Smash T20 2018-19 will be played between Wellington Firebirds and Canterbury Kings at the Basin Reserve in Wellington.

The Basin Reserve has of late witnessed some thrilling games as the pitch here tends to behave oddly in the latter half of the second innings. In the previous five completed Twenty20s here, the teams batting first made over 170 runs only on one occasion. The Central Stags, who made 194 batting first against the hosts, won by a 29-run margin last year. In the other four matches, the chasing side Wellington won two and lost twice. Both those defeats came by a one-run margin.

The expectations will be high on Jamieson here on after considering his record. He has bagged 24 wickets in his 15-match T20 career and has the ability to contribute with the bat that he showed in the first match with an unbeaten 33.

The Canterbury Kings’ all-rounders Kyle Jamieson, Cole Mcconchie and Andrew Ellis are value for money picks and are worthy of multipliers as well. Other than this trio, the batsmen in form of Adam Hose and Devon Conway can be considered as well. 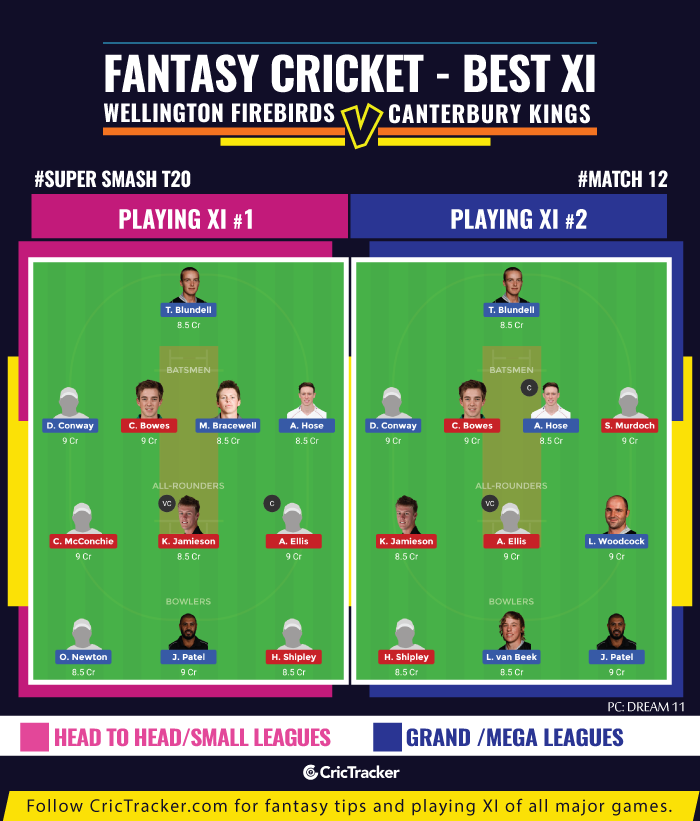 Tom Blundell and Cam Fletcher are in the wicketkeepers’ category for this game and will find a place in the playing XI. Neither of them is superior to the other given their batting positions and might not make any major difference.

Wellington Firebirds will start as favourites but the game will not end without a real fight from the Canterbury Kings.