Northern Knights will obviously be the favourites but the Canterbury Kings won’t go down without a fight.

The defending champions Northern Knights are on the top of the points table with three wins from the four matches they’ve played thus far. They sneaked in a 2-run win against the Auckland Aces in the previous match at the Seddon Park. Their only loss came against the Central Districts which was their 2nd game of the season. The Knights go with an unchanged 12-man squad against the Canterbury Kings for the game on Wednesday.

Canterbury began with a 5-wicket defeat to Otago but bounced back in the first T20 game of the new-year where Kyle Jamieson picked up six wickets for seven runs in his four overs. However, they fell apart in the game against the Wellington Firebirds conceding 200/5 and were bundled out for 135 in response with their skipper Cole Mcconchie alone scoring 83. Tom Latham is in line to play against the Knights as he replaces Tyler Lortan in the 12-man squad.

The 13th match of the Super Smash T20 2018-19 will be played between Canterbury Kings and Northern Knights at the Hagley Oval in Christchurch.

The Hagley Oval wasn’t a venue for the batting sides in the previous season. The teams batting first recorded score of 150, 168 and 161 in the three completed matches in 2017/18 Super Smash and won all of them.

The Canterbury’s captain Cole Mcconchie was the top scorer in team’s previous two matches with the scores of 83 and 47*. He has picked up two wickets from three games this season and will be crucial for Canterbury’s chances again.

Northern Knights’ Daryll Mitchell and Anton Devcich will be perfect for the multiplier roles while the Canterbury Kings’ Kyle Jamieson, Cole Mcconchie and Andrew Ellis give them a good run for their money. 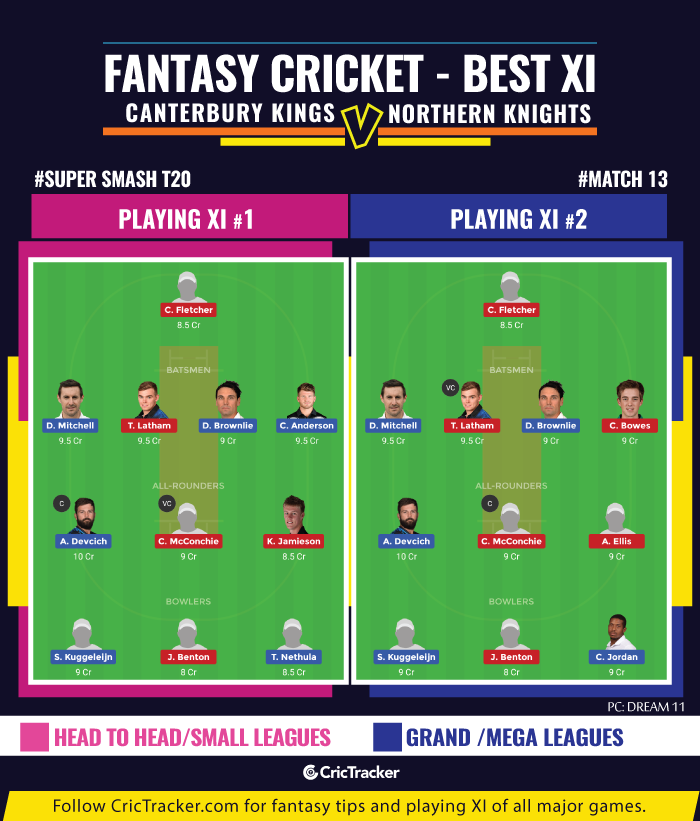 The all-rounders category has the likes of Anton Devcich, Mitchell Santner, Kyle Jamieson, Cole Mcconchie and Andrew Ellis. Along with these five, Brett Hampton is also an option. Among them, Devcich, Jamieson and Mcconchie will be the first preferred trio of any fantasy player. Keeping that in mind, you can take a risk with the other names.

Northern Knights will obviously be the favourites but the Canterbury Kings won’t go down without a fight.