Northern Knights will start as the favourites against Canterbury Kings where they aim for their 5th consecutive win.

The defending champions Northern Knights continued their winning spree in the Super Smash 2018-19 as they are on the top of the points table with five wins from six matches they played thus far. After losing to Central Stags in their 2nd game, the Knights have won four on the trot. They will now face the Canterbury Kings whom they defeated by two wickets in the last week’s away fixture. The Canterbury has managed to win only one of the five matches they played and are placed at bottom of the table.

The Knights have few big names added to their squad after completion of the home series against Sri Lanka. Scott Kuggeleijn, Ish Sodhi and Tim Seifert will be part of their 13-man squad to face the Canterbury Knights. The three players who featured in the One-off T20I against New Zealand will be replacing Joe Carter, Tarun Nethula and Joe Walker in the squad. Canterbury has brought in Henry Nicholls for Steve Murdoch while Will Williams has been added as the 13th player to the squad.

The 18th match of the Super Smash T20 2018-19 will be played between Northern Knights and Canterbury Kings at the Seddon Park in Hamilton.

The average score first innings score from the previous seven Twenty20 matches here is over 175 with scores of 190+ been recorded in four times. The spinners are expected to get grip on the ball as the game progresses. The Knights posted 215/6 while batting first in the first match of the season and won by 45 runs. In the game against Auckland, the Knights won by two runs while defending 155/9.

The Northern Knights’ Scott Kuggeleijn showed what he can offer during the T20I against Sri Lanka. On his debut, Kuggeleijn scored an unbeaten 15-ball 35 and picked up a wicket later. In the five Super Smash matches this season, he bagged ten wickets including a four-wicket haul.

Northern Knights’ Daryll Mitchell and Tim Seifert are ideal for the multiplier roles. The latter was in great form with the bat before joining New Zealand squad. Mitchell has been consistent with the bat and also picked up a few wickets with the ball. The Canterbury Kings’ all-rounder Kyle Jamieson, Cole Mcconchie and Andrew Ellis are worth the money and will be perfect alternatives as captain and vice-captain. 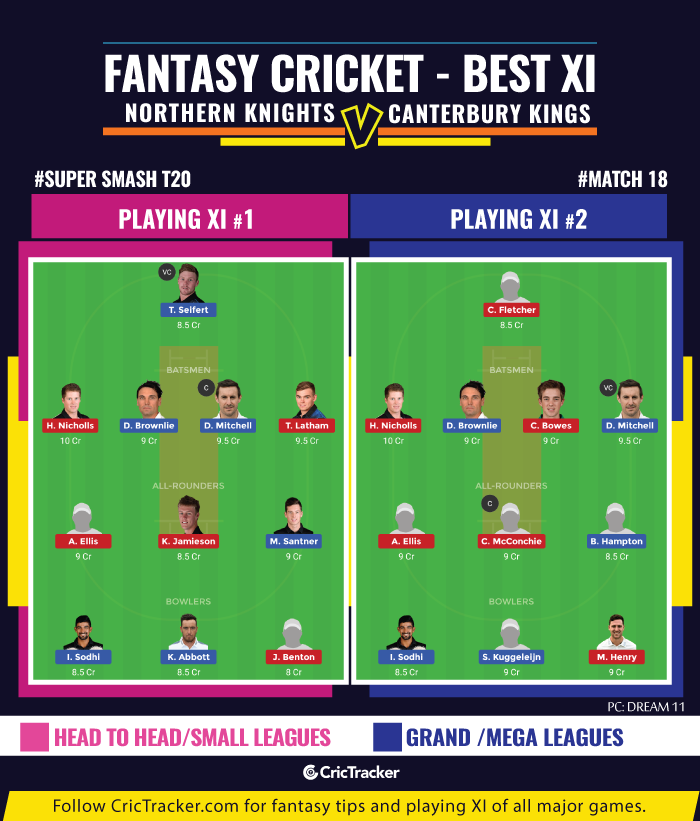 The all-rounder’s category is filled with Mitchell Santner, Kyle Jamieson, Cole Mcconchie, Andrew Ellis, Todd Astle and Brett Hampton. Based on recent most and taking each players’ lowest performance, we have picked Jamieson, Ellis and Santner. Mcconchie is too good a player to be kept out as well.

Northern Knights will start as the favorites against Canterbury Kings where they aim for their 5th consecutive win.