Auckland Aces will start as favourites against the Wellington Firebirds given the big names on their side.

The Auckland Aces are positioned 5th among six teams in the points table despite losing only two matches in the tournament so far. They have played five matches thus far, the fewest among all the teams. Two of their matches got abandoned where they had some International stars in their line-up. The Aces defeated Central Stags before losing to the Canterbury Kings by five wickets and Northern Knights by two runs.

The Aces were going well in their previous game against the Otago Volts where they made 117/1 from 11 overs before the rain intervened. They will have the likes of Martin Guptill, Colin Munro, Glenn Phillips and Lockie Ferguson on their side when they face Wellington Firebirds at the Basin Reserve. The Firebirds also have Jimmy Neesham on their side who comes in place of Ben Lister. The injured all-rounder has to prove his fitness for returning to the national team.

The 19th match of the Super Smash T20 2018-19 will be played between Wellington Firebirds and Auckland Aces at the Basin Reserve in Wellington.

Basin Reserve is a perfect venue for T20s as the track here usually stays the same or in fact gets better as the game progresses. The recent record which suggests that batting sides win more than chasing sides here masks the games where teams lost by a margin as small as one run.

In – Jimmy Neesham | Out – Michael Pollard

In – Lockie Ferguson | Out – Ben Lister

Michael Bracewell has scored 218 runs in five games this season including a hat-trick of fifties. The Firebirds’ opener has produced some power-packed innings to make the most of the field restrictions. He will be crucial for the Wellington’s chances against Auckland.

Jimmy Neesham will be raring to go and continue his form from the ODI series against Sri Lanka. The Auckland openers Martin Guptill and Colin Munro are also expected to make a strong impact. Michael Bracewell will be a perfect alternative as a multiplier. 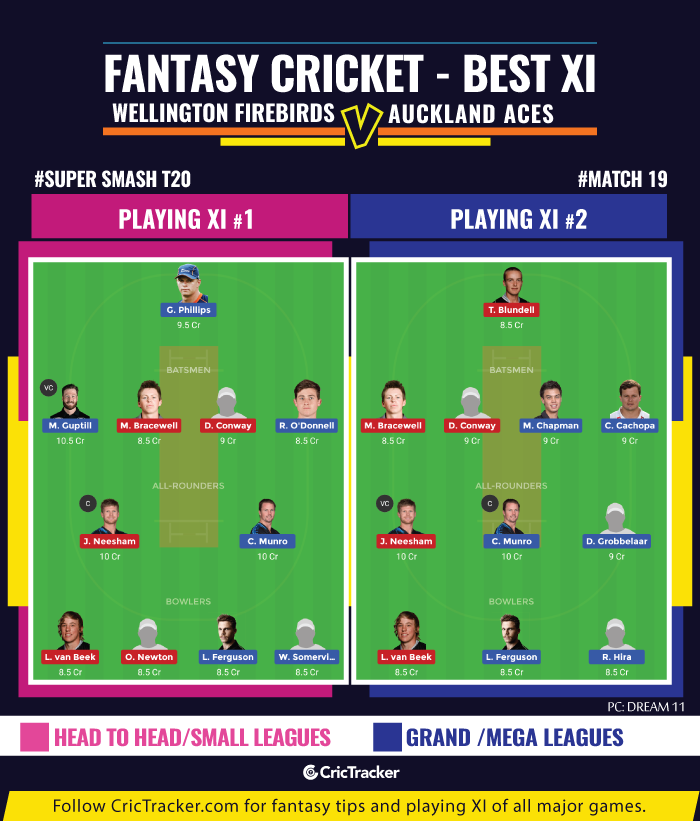 Quite a few skilful batsmen are part of both the teams which makes it tough to choose from the batsmen’s category. In T20I cricket, picking the top order batsmen will be ideal for the fantasy team. Guptill, Bracewell and Conway have to be the first choice from this category.

Auckland Aces will start as favourites against the Wellington Firebirds given the big names on their side.