Who will replace Tom Latham, Matt Henry and Henry Nicholls the trio that is on national duty?

The Auckland Aces clinched a 4-run win over the Otago Volts on Sunday to keep themselves in line for a top-three finish. This was their first outing without the International players in this season. With three wins and two washouts from seven games, Auckland have 16 points and are placed 3rd in the points table. They will be up against Canterbury Kings who are reeling with six defeats from seven matches.

Canterbury needs to win the remaining three matches but lost some of its key players due to the home ODI series against India. The equation for Canterbury is that Auckland should not win another game while Otago and Wellington Firebirds have to lose at least two of their remaining three. Canterbury face both those teams in the next two matches and a big win will help their cause a great deal.

The 23rd match of the Super Smash T20 2018-19 will be played between Canterbury Knights and Auckland Aces at the Hagley Oval in Christchurch.

This match will not be broadcasted due to the ODI game between New Zealand and India.

The Hagley Oval in Christchurch is an unpredictable T20 venue. It usually produces high scoring games and there are occasions when the score is under 120. Same has been the case in chases as well. Considering all that 170+ is the expected score in the game between Canterbury and Auckland.

Mitchell McClenaghan has featured in five matches this season and picked up as many as 11 wickets from the four innings. He started the season with a hat-trick of 3-wicket hauls before recording figures of 2/33 in the last match against Otago, which can be called his “worst” bowling performance of the tournament so far.

Daniel Bell-Drummond had a good start in the first game and will be eager to make a big one. McClenaghan’s consistency warrants a vice-captain option. Canterbury skipper Mcconchie has performed irrespective of team’s success and can be picked as captain or vice-captain. Glenn Phillips, Andrew Ellis and Mark Chapman are ideal alternatives. 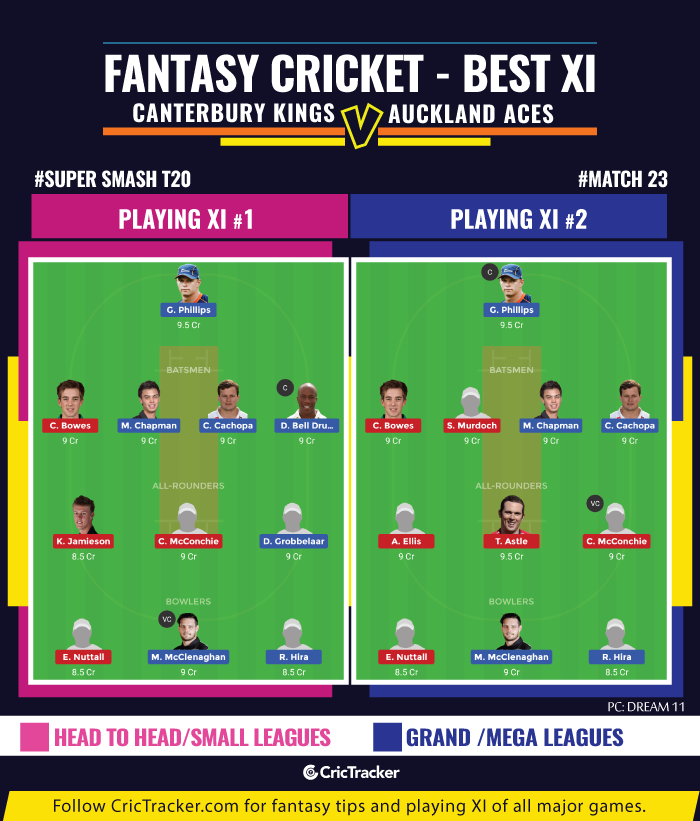 The biggest decision for this game will be the selection of all-rounders. Cole Mcconchie, Kyle Jamieson, Donovan Grobbelaar, Andrew Ellis and Todd Astle are expected to be part of the playing XI. Among the five, only Canterbury skipper Cole bats in the top order. Jamieson and Astle will be perfect picks based on the track in Christchurch.