Details on the availability of Jimmy Neesham, Adam Hose and Neil Broom for this game.

Otago Volts and Wellington Firebirds will lock horns in a crucial Super Smash game in the view of play-offs at the University Oval in Dunedin. For making it to the final three, both Otago and Wellington need to win their remaining three matches. Both the teams have won only two of the seven matches they played but Otago have two points more due to the two washouts they were a part of.

They have not won a game since winning each of their first two matches. However, the return of Neil Broom will surely give the Volts a boost towards the final stages of the league phase. On the other hand, Wellington Firebirds are placed at No.5 among the six teams with ten points in their kitty. The presence of Jimmy Neesham is expected to make a difference for the Firebirds.

The 24th match of the Super Smash T20 2018-19 will be played between Otago Volts and Wellington Firebirds at the University Oval in Dunedin.

The University Oval in Dunedin has generally been a high-scoring T20 venue. However, the weather has not often helped the cause as quite a lot of matches here have been abandoned while some turned out to be less than 20-overs games. The chasing teams have a pretty good record at this venue irrespective of the target.

Jimmy Neesham is available to feature for the Wellington Firebirds. Under-19 star all-rounder Rachin Ravindra has been included in the Firebirds’ squad for the first time. Adam Hose is unavailable due to injury.

Ollie Newton picked up ten wickets from six matches in this season. The pacer has been effective in the recent matches as he picked up 8 wickets from the previous four taking at least two in three games. His bowling figures in last two games read 2/20 and 3/26.

Anaru Kitchen has been consistent throughout the tournament while Hamish Rutherford is expected to fire up Wellington in the must-win game. The likes of Jimmy Neesham, Neil Broom and Michael Bracewell could be top picks from this game. Rachin Ravindra could turn out to be surprise package if he gets a game. 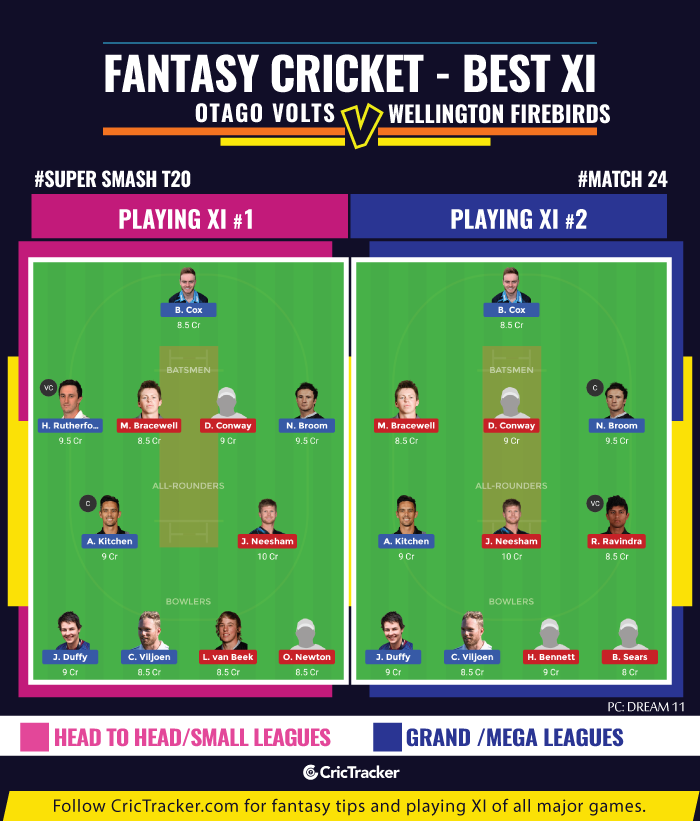 There is a straight 2-way battle in the wicketkeeper’s category between Ben Cox and Tom Blundell. Choosing either of the two might not make a difference as both of them cost 8.5 credits and have hardly made any impact in the tournament. However, there are slight chances of Ben Cox opening in the next game if Broom bats at No.3. In fact, Cox is more skilful batting in the middle-order than Blundell.

Wellington Firebirds are expected to defeat the Otago Volts and stay alive in the competition.