Neil Broom is expected to play this match while Todd Astle misses out.

Otago Volts’ wait to register their 3rd win of the season has extended to six matches as they lost to the Wellington Firebirds and Auckland Aces by narrow margins of 11 runs and 4 runs respectively. The two defeats now put their chances of final three tough. They need to win their remaining two matches and at the same time expect Auckland Aces lose their remaining two matches.

Central Districts confirmed their spot in the final three after knocking Wellington Firebirds out on Friday.  The Northern Knights more or less confirmed their top spot while the Canterbury Knights are too on their way to home like the Firebirds. The Knights will be hoping to spoil the party of the Volts in their penultimate game of the season. Canterbury are currently on 6-match losing streak at the moment.

The 26th match of the Super Smash T20 2018-19 will be played between Canterbury Knights and Otago Volts at the Hagley Oval in Christchurch.

The Hagley Oval in Christchurch is known for its unpredictability. High scoring games are usually recorded here and scores under 120 in some other games. The chasing teams have come close or chase down targets over 190 and at the same time crumbled to huge defeats.

Todd Astle has been added to the New Zealand ODI squad for the last two matches. He will be unavailable for the Canterbury Knights.

Neil Broom missed four consecutive matches of the Otago Volts at the start of the year. He had scores of 32, 34 and 22 at the start of the season and continued his where he left. He struck a quick-fire 65 and once again will be crucial for his team’s chances.

Neil Broom and Hamish Rutherford as expected to dominate the game with the bat and have to be considered as a multiplier. Anaru Kitchen is a worthy option while Mcconchie will be hoping to lead the team from front to their 2nd win. 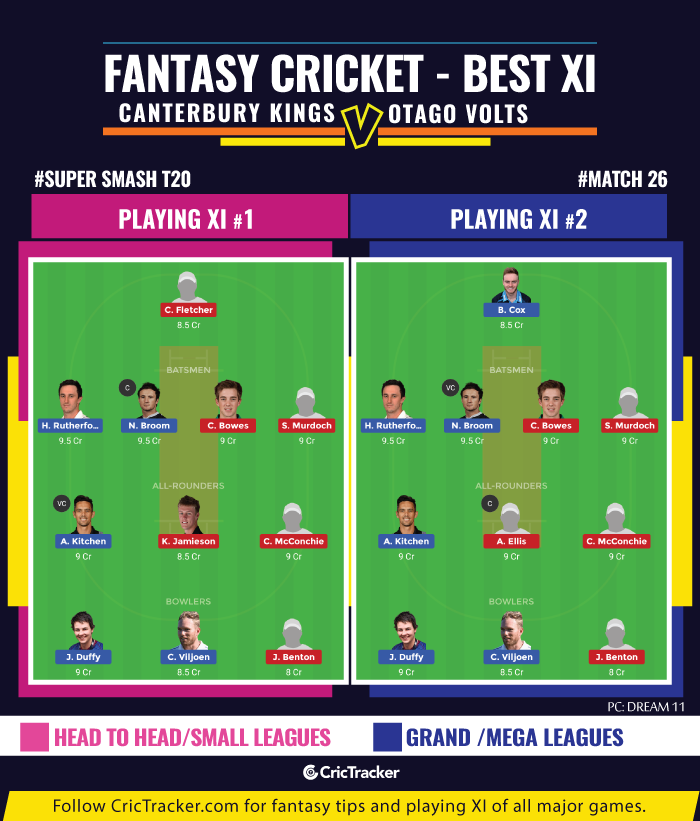 The all-rounders section contains Cole Mcconchie, Kyle Jamieson, Anaru Kitchen and Andrew Ellis. Anaru is the reliable option among the four while Andrew Ellis has been out of form recently. Kitchen can be considered as a multiplier while Ellis could be risky but effective.

Otago Volts will start as favourites as they are a better all-round team than the Canterbury Kings.