Leeward Islands are the favourites to win the final match and seal the title of Super50 Cup 2019.

The final match of the Super50 Cup 2019-20 will be played between West Indies Emerging team and Leeward Islands at the Queen’s Park Oval in Port of Spain, Trinidad.

West Indies Emerging team and Leeward Islands will lock horns in the final of Super50 Cup 2019. Both the sides ended on second position in their respective groups in the league stage.

For Islands, Kieran Powell and Devon Thomas are playing in their top-notch form with the bat. Powell has amassed 511 runs whereas Thomas has scored 353 runs in the on-going tournament. They have played an important role in the good performances of their sides. The duo will play a vital role if their team wants to seal the title. In bowling, they have Sheeno Berridge, who has grabbed as many as 21 wickets in eight outings. He is also the leading scorer in the Super50 Cup.

With the likes of Keon Harding, Ashmead Nedd and Joshua Da Silva, West Indies Emerging team holds a big chance to outclass Islands in the final. The team has displayed some brilliant team effort in the group stage. They would be eager to replicate their good form in the crucial game and will have an eye to grab the title.

The chances of rain are quite high on the match day. It is expected that the showers might hamper the length of the game as well. However, the temperature is expected to range between 25 and 32 Degree Celsius throughout the day according to Accuweather.

The track at Queen’s Park Oval is expected to favour the spinners but in the second innings of the game. Also, it is expected to be a high scoring game looking forward to the batting firepower present in both the sides. However, the team winning the toss is expected to field first as per the trends at this venue.

Kieran Powell will be a key player for any Dream11 Fantasy side because he played brilliantly throughout the tournament. In this season fo Super50 Cup, he holds an average of 63.87.

Joshua Da Silva will also be an important player to watch in the final. Until now, he has scored one ton and one half-century in the tournament. 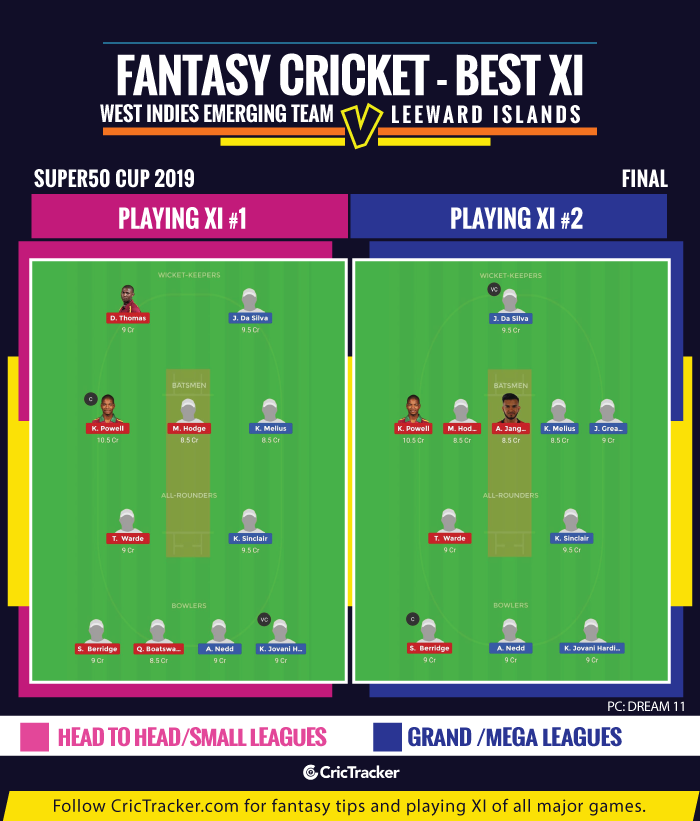 Until now, Montcin Hodge has not performed well with the bat but he holds a calibre to play a big knock for his side on his good days. Looking forward to his form he might be a big risk to take in the final match but will be worth for any Grand League Side.

Leeward Islands are the favourites to win the final match and seal the title of Super50 Cup 2019.