Chandrapaul Hemraj will be the perfect choice as captain considering his recent exploits with both bat and ball.

The 3rd match of the Super50 Cup 2019-20 will be the Group B game between Guyana and West Indies Emerging Team played at the Brian Lara Stadium in Tarouba, Trinidad.

The West Indies Emerging Team will be in the action on Thursday during the Super50 Cup 2019-20 match. They face the Guyana team at the Brian Lara Stadium in Tarouba. The emerging team is filled up with young players including the ones who are coming from the Under-19 circuit. They will be led by Yannic Cariah while the Guyana team will play under Leon Johnson’s captaincy. The likes of Tagenarine Chanderpaul, Chandrapaul Hemraj and Justin Greaves are the batsmen to watch out for in this fixture.

Scattered thunderstorms with rain is predicted during the afternoon in Tarouba. However, things are expected to get cleared 4 PM local time. We might have a reduced match if the weather pans out as expected.

Super50 Cup 2018/19 was the only instance the Brian Lara Stadium hosted List A fixtures. The season here began with a couple of 300+ totals before inconsistency in the totals as the tournament progressed. Hence, we might see a high-scoring game on Thursday.

Kimani Melius scored 257 runs at an average of 102 in the 2018 U19 Super50 Cup. An exceptional fact about his performance in that competition was 138.17 while no other player had scored over 100 runs at 100+ SR. Camarie Boyce bagged 14 wickets in the same competition at an impressive average of 9.5. Tagenarine Chanderpaul played only one match in the previous season and scored his maiden List A fifty. Raymon Reifer struck four fifties in the previous edition across seven innings and averaged 64.6. He also took five wickets in the same tournament.

Chandrapaul Hemraj will be the perfect choice as captain considering his recent exploits with both bat and ball. 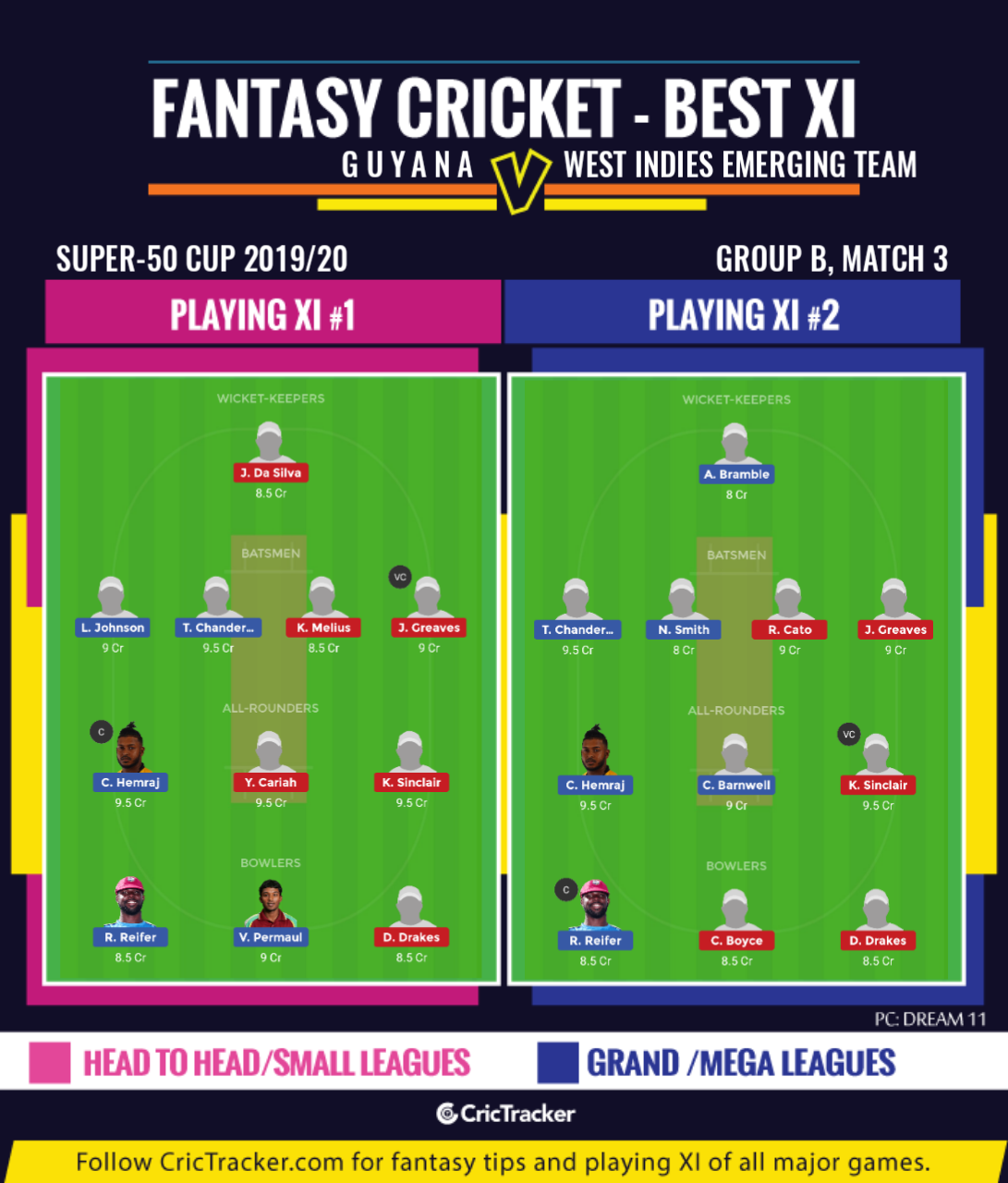 The possible playing XI of the Emerging Team will remain uncertain until the toss. Hence, we have picked top players from their squad who are likely to play on Thursday irrespective of any fitness/injury issues.

The strong Guyana team could face a tough fight from the team filled with young players.