Andre McCarthy will be beneficial due to his all-round abilities.

The 37th match of the Super50 Cup 2019-20 will be the Group A game between Jamaica vs Leeward Islands played at the Conaree Sports Club, Basseterre, St Kitts.

The Leeward Islands have won back to back two games and are in contention to qualify for the semi-finals of the tournament. They are ranked 2nd in Group A with 16 points. Also, Jamaica has the same points but their net run rate is low because of which they are on the 3rd position.

For Jamaica, it will their last game in Super50 Cup 2019-20. This will be a decider for them whether they will play in the semi-finals or not. They faced a crucial defeat against Combined Campuses and Colleges but Jamaica would be eager to perform well and grab two important points in the league. They have some big match-winners liker Kieran Powell, Devon Thomas and Sheeno Berridge, who can win them any big game.

Leeward have regained their form and are currently moving on winning streak. Their players have given some breakthrough performance in the tournament because of which they are the favourites to qualify for the semi-finals. Oshane Thomas is the leading wicket-taker of the team, who has grabbed as many as 14 wickets in the tournament so far. In batting, they have Nkrumah Bonner, who has amassed 354 runs at an average of 59. And, looking forward the form of their players, Leewards holds an edge over Jamaica in the upcoming game.

On the match day, there are no chances of rain. And, the temperature is expected to deviate between 25-29 degree celsius during the whole day according to the Accuweather.

The pitch is expected to go in favour of batters and bowlers are most likely to struggle at the Conaree Sports Club. In the previous game, teams scored 637 runs in the whole game. However, the side winning the toss would like to bat first at this venue because the side chasing has found it difficult to outclass the score.

Nkrumah Bonner has scored 354 runs in the tournament and is moving in red-hot form. He will play an important role in any Dream11 Fantasy side.

Kieran Powell has also given some brilliant performance with the bat. He has amassed 359 runs in Super50 Cup 2019-20. So, he will be an important player to watch out in the upcoming game. 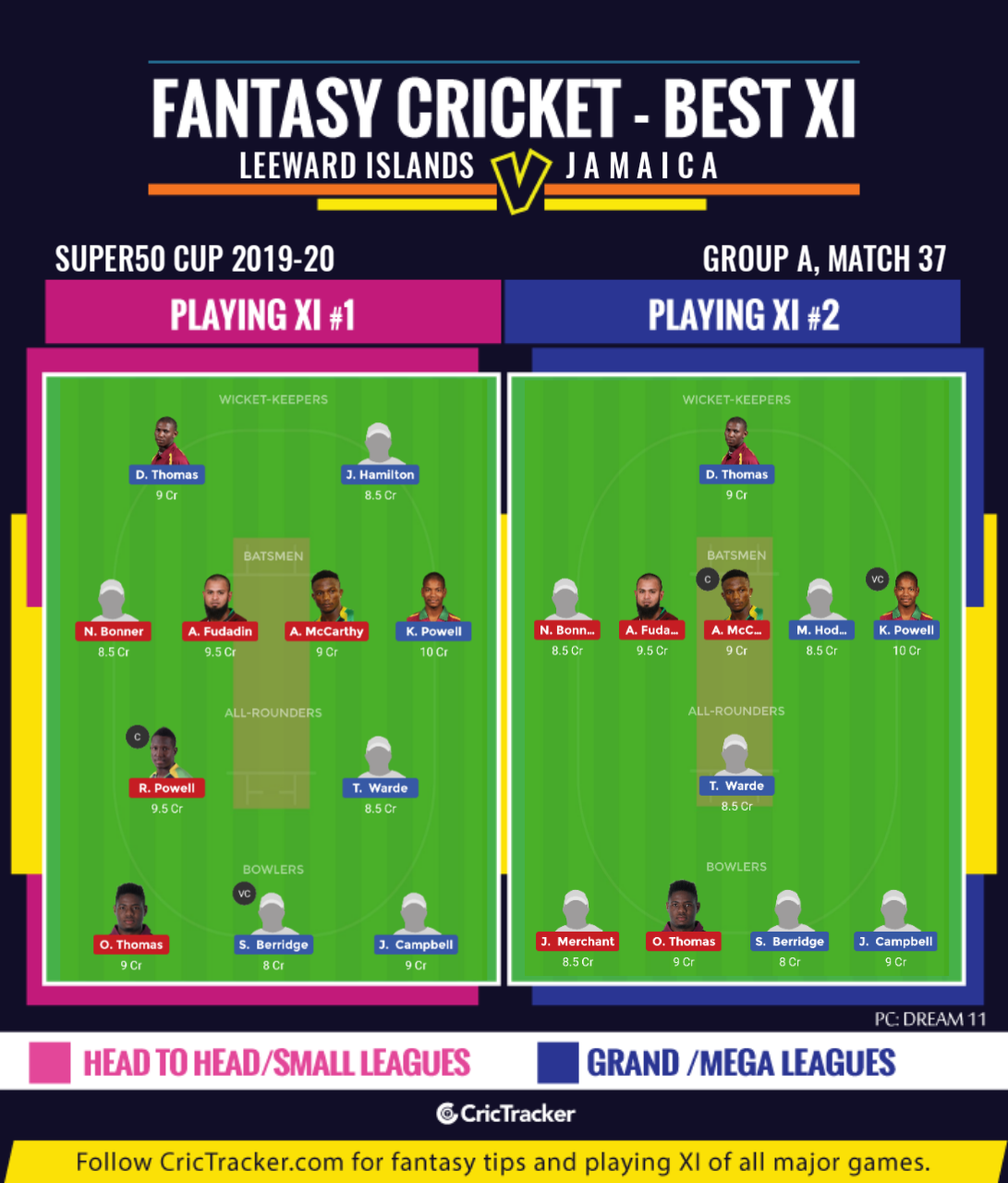 Andre McCarthy will be beneficial due to his all-round abilities. However, he has not been in his top-notch form in the ongoing tournament. He can be a risky player and cannot be neglected while picking the squad for Grand League

Leeward Islands is expected to win the match.