It is advisable to pick Romario Shepherd in both of your Dream11 Fantasy teams.

The 15th match of the Super50 Cup 2021 will be played between Guyana Jaguars and Windward Volcanoes on 22nd February at Coolidge Cricket Ground in Antigua.

A win for Windward Volcanoes in this encounter will put them in level terms with Guyana Jaguars. Both teams can end the group stage with 12 points each, only to be separated by the Net Run Rate (NRR). However, both teams have faced defeats in their last match and will be looking to gain momentum before entering the knockout stage.

The weather is expected to be sunny in Antigua with the temperature around 25 degrees Celsius and the humidity levels are at 70 percent.

The pitch at Coolidge Cricket Ground is balanced for both batsmen and bowlers. Teams winning the toss will look to chase at this venue.

Keron Cottoy has been a consistent performer for Windward Volcanoes, scoring 148 runs and picking up three wickets so far in the tournament.

Windward Volcanoes’ skipper Sunil Ambris leads the tally of most runs scorers for his side, having scored 190 runs in four matches with the highest score of 70.

Larry Edwards is amongst the list of leading wicket-takers of the tournament, having picked up seven wickets in four matches with the best figures of 3/36.

Gudakesh Motie has scalped 11 wickets in four matches at an economy of close to 5 runs per over. He is the go-to bowler for his captain for picking up wickets at crucial intervals.

Romario Shepherd has impressed everyone with his all-round performance. He has scored 105 runs and has picked up five wickets as well. 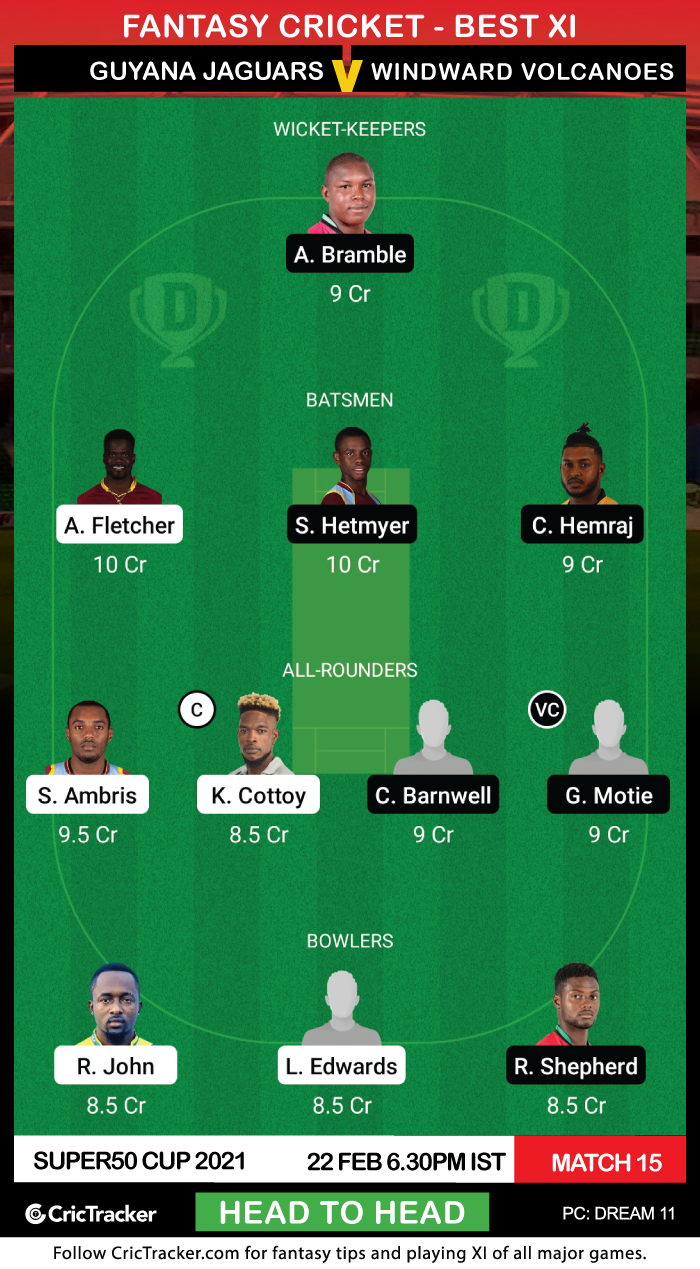 It is advisable to pick Romario Shepherd in both of your Dream11 Fantasy teams as he will get you points with the bat as well as with the ball.