Hiten Dalal scored 116 runs across the last three matches in the tournament.

Andhra’s happiness of registering a 179-run margin victory against Nagaland didn’t last long as they suffered back to back defeats after the record margin win in the Twenty20 history. In the next game, Andhra lost to Kerala by only eight runs. The Andhra team were needing nine runs from the last five deliveries and were set towards a victory. However, Sandeep Warrier bagged a hat-trick to finish off the game.

Andhra was dominated by Jammu & Kashmir in all departments who cruised to a 6-wicket win on Monday. The home team will now face the in-form Delhi team in a must-win game. The Nitish Rana-led side suffered a 3-run defeat in their first match against Jharkhand. They bounced back with a hat-trick of wins by defeating Manipur, Jammu & Kashmir and Kerala in their next three games.

The Syed Mushtaq Ali T20 Trophy 2018-19 match between Andhra and Delhi will be played at the Devineni Venkata Ramana Praneetha Ground in Mulapadu, Vijayawada.

The track at the Devineni Ground in Mulapadu produced higher scores in the afternoon games compared to that of morning matches. The conditions during the game between Andhra and Delhi can be estimated based on how the track behaves during the morning game between Kerala and Jammu & Kashmir.

Hiten Dalal is known for his aggressive approach irrespective of the format he plays in. Opening the innings for Delhi, he scored 56*, 32 and 28 in the previous three games. Dalal will be once again crucial for Delhi’s winning chances. 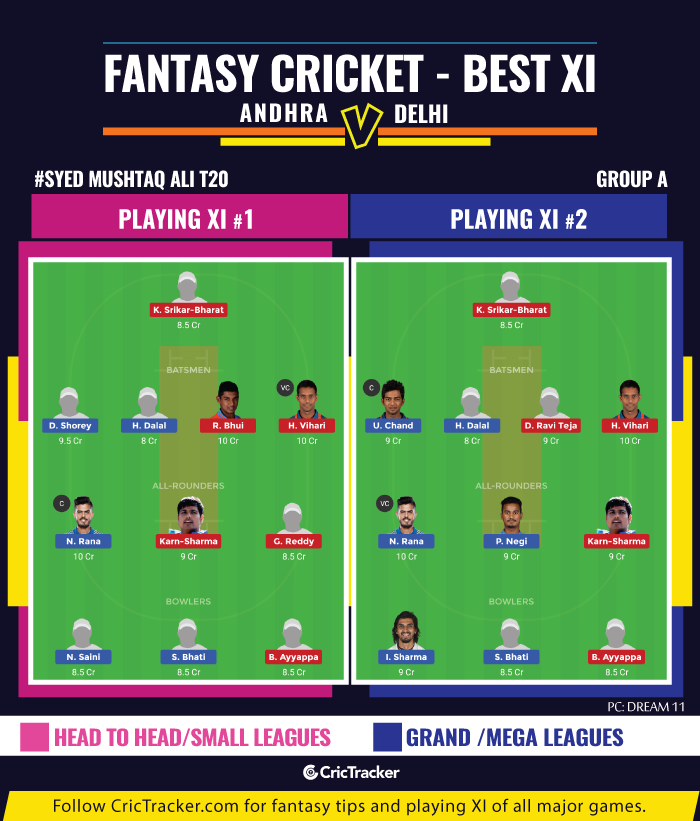 Selecting players from the all-rounders’ category will be a bit tough given the available options in form of Nitish Rana, Lalit Yadav, Girinath Reddy, Karn Sharma and Pawan Negi. Nitish and Karn will be ideal among the five given their experience and the recent outings. Performances of other players will depend upon the match situations.

Delhi is expected to bag their 4th consecutive win and hand Andhra their 3rd successive defeat.