Mayank Agarwal is set to miss the game due to neck pain.

Both Karnataka and Bengal teams kick-started their respective Syed Mushtaq Ali T20 campaigns with convincing wins on Thursday. Skipper Manish Pandey scored 74 off just 39 balls with six fours and four sixes as Karnataka posted 169/6 in their 20 overs. Assam were five down for just 61 runs on the board but fifties from No.6 and No.7 batsmen helped them to finish on 154/7 and bring down the margin to 15 runs.

On the other hand, Bengal put on a record total against Mizoram as Abhimanyu Easwaran scored an unbeaten 107 from only 56 deliveries. Shreevats Goswami too scored a 33-ball 55 at the top as they finished on 221/4. Mizoram were bowled out for only 62 runs in reply as Bengal registered a record 159-run win. 16-year-old leg-spinner Prayas Barman registered figures of 4/14 in the three overs he bowled on his T20 debut.

The Syed Mushtaq Ali T20 Trophy 2018-19 match between Karnataka and Bengal will be played at the DRIEMS Ground in Cuttack.

List of broadcasted matches from the tournament on Day 2:

Delhi vs Manipur and Nagaland vs Andhra

Vidarbha vs Bihar and Gujarat vs Rajasthan

The DRIEMS Ground in Cuttack has witnessed some good scoring T20 matches over the years. Five of the last six T20 games hosted by this venue saw scores over 150. Given the way both the sides batted in their respective first games, anything over 160 can be expected from the team batting first.

Mayank Agarwal missed the first game due to pain in the neck. He might not play the game against Bengal as well.

Since the start of 2017, Shreevats Goswami has scored as many as eight half-centuries from 13 innings for Bengal in T20 cricket. He has scored 630 runs in those 13 games at an average of 57.27. Goswami will be hoping to continue his T20 consistency when they face Karnataka on Friday. 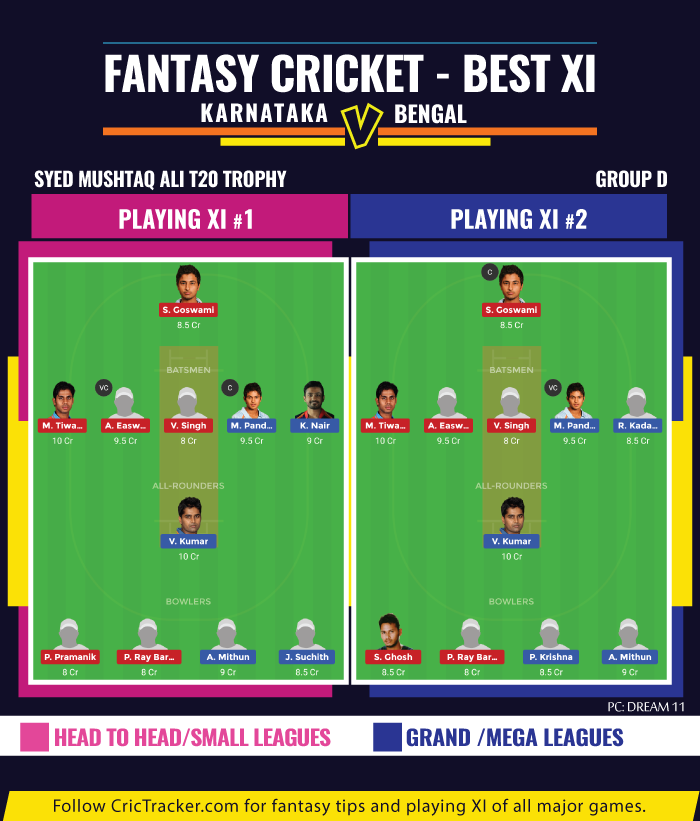 Both the teams are expected to go unchanged after a victory in the first match. Shreyas Gopal has rarely been the first option in the T20 format for Karnataka.

Karnataka is expected to have an upper hand over Bengal going by their performances in the first match.