Karnataka is favourites to win the first semi-final and reserve their spot in the finals.

The 1st semi-final of the 2019-20 Syed Mushtaq Ali Trophy will be played between Karnataka and Haryana at Lalabhai Contractor Stadium in Surat.

Karnataka and Haryana will lock horns in the first semi-final and it is expected to be enthralling encounter. Haryana gave some convincing performances during the Super League stage of Syed Mushtaq Ali Trophy. They ended up being the table toppers with 12 points in their respective group. However, they lost a close game by two runs against Maharashtra in their previous outing.

With the likes of Yuzvendra Chahal, Harshal Patel and Amit Mishra, Haryana boasts of a strong bowling line up and they will play an important role in the semi-final.  One place where Harayana needs to work on is their batting line up. They will have to fill the voids ahead of their clash against Karnataka. Only Harshal Patel has given some convincing performances for his side in the ongoing tournament.

For Karnataka, their seven games winning streak came to an end against Mumbai. But, it couldn’t stop them from qualifying into the further stage of the tournament. They are the favourites to win the game against Haryana because their team has been in form throughout the tournament.

In batting they KL Rahul, Devdutt Paddikal, Manish Pandey and Karun Nair, who will play an important role in terms of piling runs in the semis. Also, their bowling looks settled with the likes of Abhimanyu Mithun, Shreyas Gopal and Ronit More.

It will be a perfect sunny day for cricket with no chance of rain. The temperature throughout the matchday is expected to deviate between 34 and 36 Degree Celsius.

The pitch at Lalabhai Stadium is expected to go in favour of the batsmen. In the previous game played at the same venue, Mumbai and Punjab managed to score a total of 464 runs in 40 overs.

However, the spinners might get some help in the second half of the game. As per stats, the team winning the toss will look to bat first because the teams have found it difficult to chase.

Average first innings score at this venue: 175 (Last seven matches of the season)

KL Rahul and Devdutt Paddikal are playing in red hot form in the ongoing tournament. They will play an important role in any Dream11 Fantasy side. Harshal Patel is the 2nd leading wicket-taker in the ongoing tournament. He has grabbed as many as 18 wickets in 11 games as well as he can also contribute with the bat. So, he will be an important player to watch out in the first semi-final. 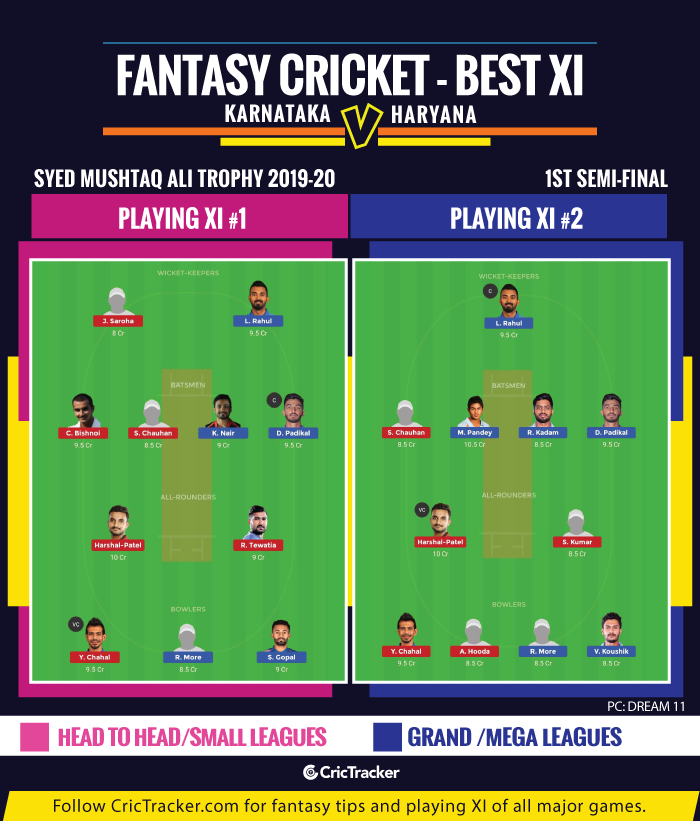 Yuzvendra Chahal is still due to give a breakthrough performance with the ball. He never looked effective in the ongoing tournament. However, he will be a risky pick looking forward to his form but will be worth for any Grand League side.

Karnataka is favourites to win the first semi-final and reserve their spot in the finals.