Washington Sundar is averaging 61.75 with the bat in this tournament

The Final match of the Syed Mushtaq Ali Trophy 2019-20 will be played between Karnataka and Tamil Nadu at the Lalabhai Contractor Stadium in Surat.

For the 2nd time inside 45 days, Karnataka will face Tamil Nadu in the final of a domestic competition. Both the teams won their respective semi-finals by comfortable margins. Interestingly, both the sides were part of Group B in the Super League stage. Karnataka, who gained an edge over Tamil Nadu in the Vijay Hazare Trophy final, handed a similar thrashing in the Super League match.

Karnataka, also the defending champions of the Syed Mushtaq Ali Trophy, are boosted with a top three of KL Rahul, Devdutt Padikkal and Mayank Agarwal. Tamil Nadu, on the other hand, strengthened their line-up of spinners. Ravi Ashwin and Washington Sundar give the backing to inform M Siddharth, R Sai Kishore and Murugan Ashwin.

The Surat weather has been pleasant in this tournament and is unlikely to interrupt the final of the Syed Mushtaq Ali Trophy.

The average scores and the record for this venue in Surat are mostly irrelevant. The Lalabhai Contractor Stadium has provided two types of tracks – One made of red soil and the other with black. The red soil track has been extremely tough for the batsmen at times and even totals of 100 became tough. The black soil tracks have been totally opposite.

The game between Punjab and Mumbai witness the highest aggregate in an SMA T20 match. On Friday, Karnataka comfortably chased down 195 against a quality attack of Haryana with five overs to spare. The final could be on a similar track but is expected to be a little slower.

Other than the formidable top three, the two crucial names in the Karnataka line-up who are crucial in the fantasy team are Shreyas Gopal who has 18 wickets in the tournament and Abhimanyu Mithun who is fresh of a 5-wicket over. Ravichandran Ashwin is likely to hold the key for Tamil Nadu if he gets promoted to open the innings again.

Washington Sundar is averaging 61.75 with the bat and has the 2nd best strike rate for Tamil Nadu in the tournament among the players with 100+ runs. R Sai Kishore has been brilliant in the tournament with 20 wickets to his name in 11 matches where he conceded runs at an economy rate of 4.63 only. 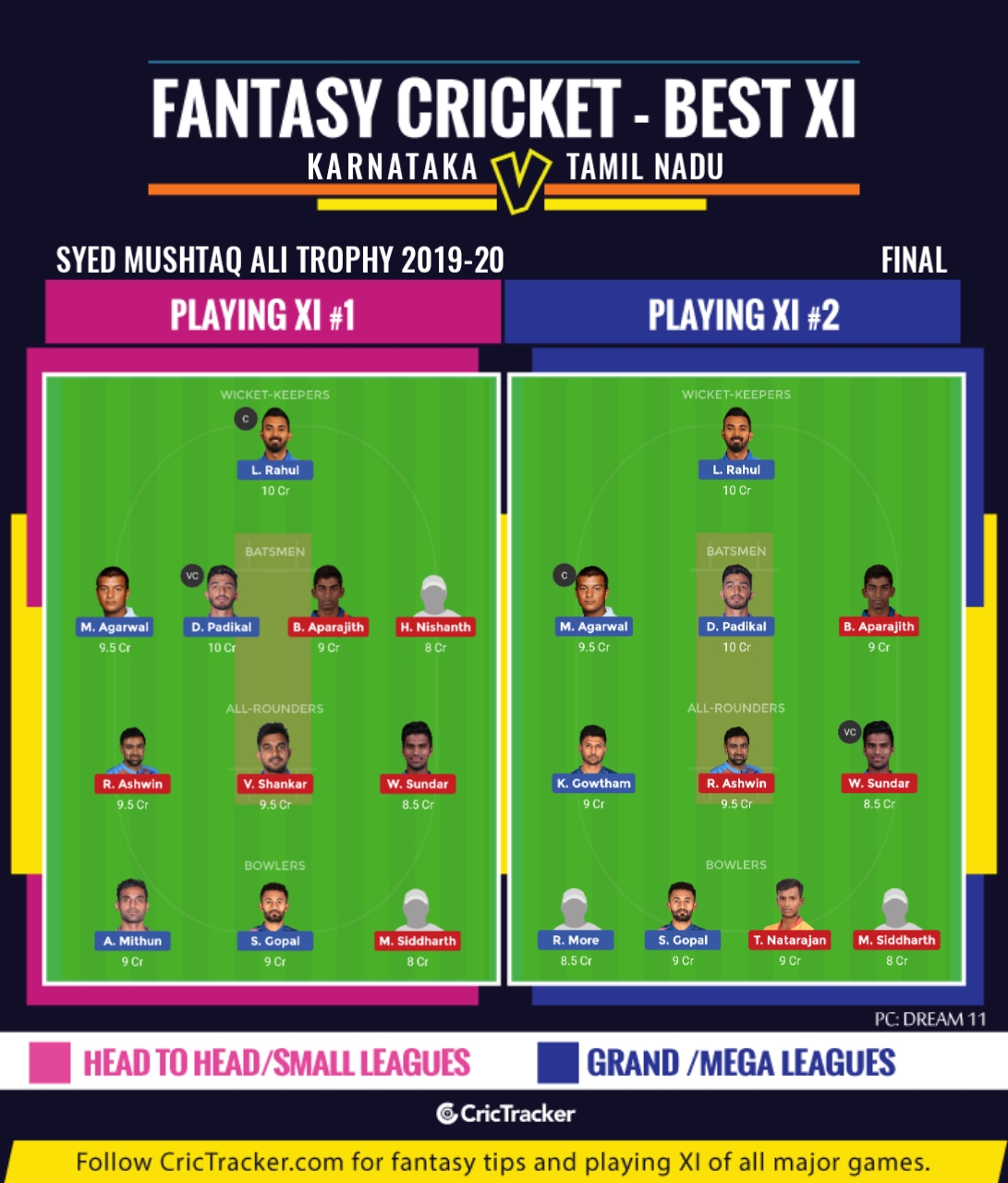 Devdutt Padikkal has been brilliant against spin and Mayank Agarwal’s ability against the same does not need an introduction. There is a great possibility of the duo getting around 15 overs of spin and medium-pace considering Tamil Nadu’s tactics against Rajasthan. KL Rahul could also be seen making merry of this favourable attack.

Moreover, he has scored 50+ in all knockouts for Karnataka this season. However, the impact of Devdutt and Mayank could be having in this match is higher compared to that of Rahul. If one of the openers fails, Tamil Nadu could face the trashing from Mayank who has put up best knocks in the knockouts. All the above is an assumption of the surface being good for batting.

Tamil Nadu would need a miracle to get better of Karnataka in the current form.