Himachal Pradesh will be steered by the likes of Prashant Chopra and Bains, who are the spine of their side's top-order.

The Round 6 match of Group C in Syed Mushtaq Ali Trophy 2019-20 will be played between Himachal Pradesh and Maharashtra at the Sector 16 Stadium, Chandigarh.

The Group C game of the Syed Mushtaq Ali Trophy will be played between Himachal Pradesh and Maharashtra in Chandigarh. Both the teams are at the bottom end of the points table with an eye to break into the top four spots. Maharashtra has gathered eight points from their four matches while Himachal Pradesh has gathered only four points from four matches. Ruturaj Gaikwad will be steering Maharashtra’s batting attack alongside Kedar Jadhav. Both batsmen have the potential to turn the match in their side’s favour.

On the other hand, Himachal Pradesh will be guided by Prashant Chopra and Ankush Bains, who have played vital knocks for their side in the past. Chopra was one of their best players in the last season,  scoring 338 runs in 10 matches at an impressive average of 42.25. Mayank Dagar and Ankush Jamwal will be heading Himachal’s bowling line-up. Himachal Pradesh will be eager to end their woes and redeem themselves in the tournament.

It will be mostly cloudy in Chandigarh on Friday. However, there is no chance of rain at all during the match. The temperature is expected to hover around 27-28 Degrees Celsius according to AccuWeather.

The wicket at Chandigarh is generally known for batting. In the past, many teams have posted a mammoth total on the scoreboard. The pitch used to assist pace and bounce but has turned slower over the years. Following the recent trend, the team winning the toss is expected to bowl first.

Ruturaj Gaikwad has emerged as one of the best batsmen for Maharashtra in the domestic circuit. The right-hander also smashed a half-century in their previous match against Chattisgarh. He scored 61 runs off 41 balls including 4 fours and 3 sixes. Despite Gaikwad’s efforts, Maharashtra did not succeed to chase down the target of 202 runs. In the previous season, Gaikwad had amassed 255 runs in 10 matches at an average of 25.50. He will be eager to fire against Himachal Pradesh.

On the other hand, Himachal Pradesh will be steered by the likes of Prashant Chopra and Bains, who are the spine of their side’s top-order. Despite showcasing a dismal performance against Arunachal Pradesh in the last match, the duo has the potential to turn things in favour of their side. Ekant Sen emerged as the best player in their previous match by scoring 51 runs off just 30 balls. Mayank Dagar is expected to head Himachal’s bowling attack. These players will be present in the majority of fantasy teams. 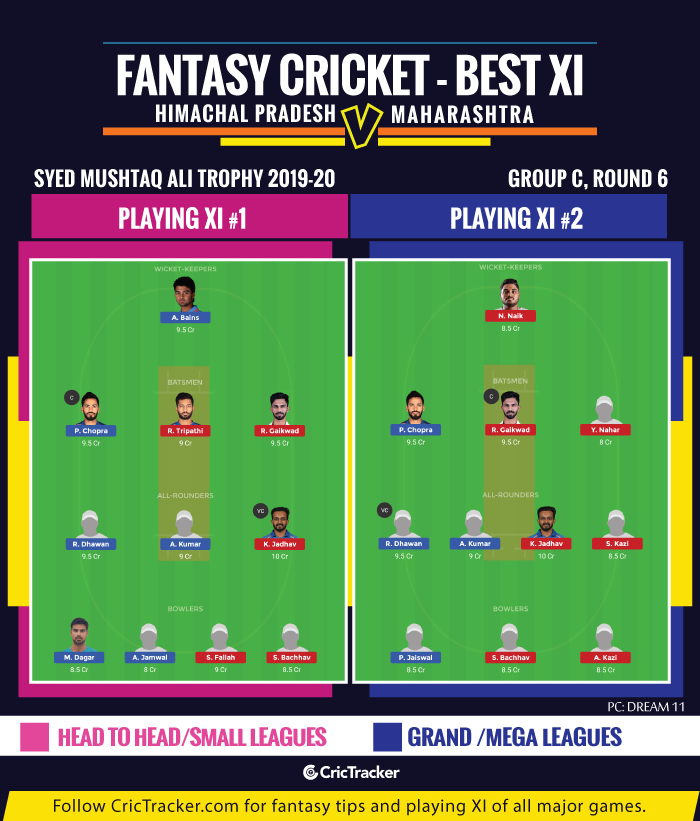 Kedar Jadhav batted at three in the previous game and scored 68 runs. He can continue batting at the top of the order and hence, he can be made C or VC of your Dream11 Fantasy side.

Maharashtra are favourites to win this encounter.