Karnataka is expected to win this match.

The super league match (A1 vs E2) in Syed Mushtaq Ali Trophy 2019-20 will be played between Karnataka and Jharkhand at the Lalabhai Contractor Stadium in Surat.

The match starts at 6:30 PM local time & IST (1:00 PM GMT). It can be watched live on Star Sports 2 and Star Sports 2 HD. Live streaming will be available on Hotstar.

Karnataka and Jharkhand are set to lock their horns in the Super League clash at Lalabhai Contractor Stadium on Friday. For Karnataka, Devdutt Padikkal was in the red-hot form during the group stage of the tournament. He amassed 303 runs at an average of 101 with one ton and two-half century. The team performed decently well and ended up as the table toppers in their group A.

Their bowler Shreyas Gopal also grabbed 13 wickets in 6 games and ended up as the leading wicket-taker of the team. In the upcoming game, Karnataka would be eager to replicate their form of group stage into the Super League.

Jharkhand emerged as the second-placed team in Group E with 22 points in their seven games. However, they lost their first game of the Super League against Punjab. But, they would be eager to make their way back onto the winning track in the upcoming game. With the likes of Virat Singh and Anand Singh in the team, they hold some serious batting power in their team.

On Friday, the weather in Surat is expected to be pleasing and perfect for a cricket match. There are no chances of rain. Also, the temperature is expected to deviate between 22-34 degree celsius during the whole day according to the AccuWeather.

It is expected to be a run-fest at the Lalabhai Contractor Stadium and the bowlers will not get much assistance from the pitch. In the previous game at the venue, Baroda remained successful in posting a mammoth total of 201 runs, and Rajasthan fell well short of the target by 15 runs,

Average first innings score: 171 (In 8 matches played so far in the tournament)

Ishan Kishan is injured and didn’t play against Punjab

KL Rahul had a successful T20I series against Bangladesh and was in full flow in the final game. He will be an important player for any Dream11 Fantasy side. For Jharkhand, Virat Singh showed his calibre in the group stage and amassed 253 runs at an average of 63.25. He played with a brilliant strike rate of 145. So, he will be a player to watch out in the upcoming game. 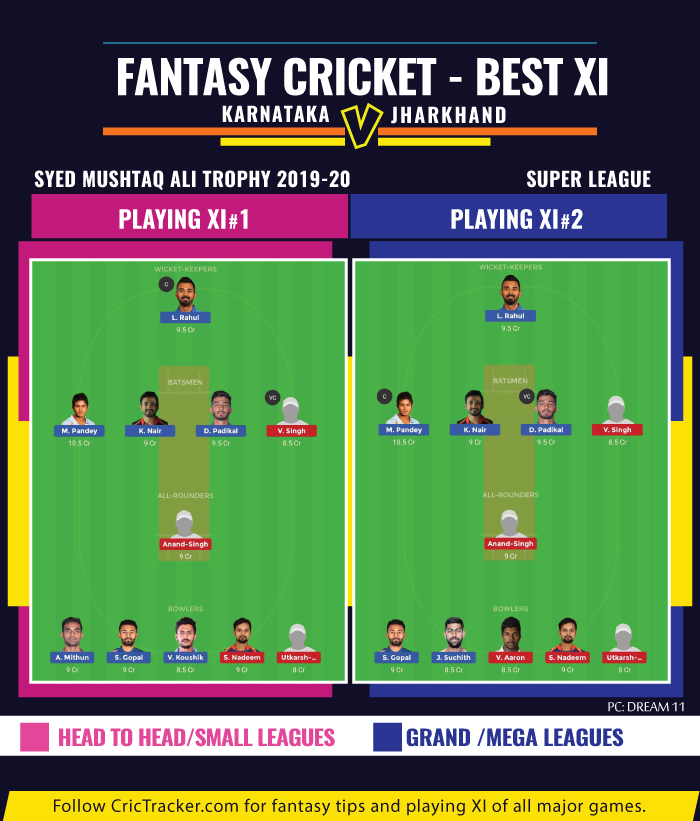 Ishan Kishan didn’t feature in the previous game for Jharkhand. And, it is expected that in the upcoming game he would mark his way back into the team. The left-handed player is an exciting batsman, who is a good hitter of the ball. However, he is a risky pick against strong bowling of Karnataka but will play an important role in any Grand League team.

Karnataka is expected to win this match.