Spinners might rule the roost again and making C or VC shouldn't be a bad idea for this match.

The Super League match of the 2019-20 Syed Mushtaq Ali Trophy will be played between Maharashtra and Haryana at Lalabhai Contractor Stadium in Surat.

Maharashtra and Haryana are scheduled to lock horns at the Lalabhai Contractor Stadium on Wednesday. Maharashtra finished their group-stage campaign on a high as they finished on the top of Group C table. Maharashtra gathered 20 points in seven matches by winning five matches.

Ruturaj Gaikwad has been a vital cog for his side and has amassed 202 runs in his last five matches including a stellar knock of 82* against Himachal Pradesh. He is expected to emerge as the talisman of Maharashtra’s batting force. In their previous Super League match, Maharashtra suffered a 6-wicket defeat against Rajasthan after their batting order failed to amass a massive total on the board.

On the other hand, Haryana registered a six-wicket win against Baroda in their last Super-League match. Haryana chased down the target of 139 with 15 balls remaining. Chaitanya Bishnoi and Shivam Chauhan, who scored brilliant half-centuries against Baroda, are expected to steer Haryana’s batting line-up.

According to the weather report, it is expected to be a bright and sunny day with the temperatures hovering around 33 degrees Celsius. However, it is going to get colder as the day progresses. The weather is expected to be perfect for a game of cricket to take place.

Average first innings score at this venue: 158 (Last six matches of the season)

Maharashtra: Maharashtra’s batting order will be bolstered by the likes of Ruturaj Gaikwad, Nikhil Naik, Rahul Tripathi and Kedar Jadhav. Gaikwad has been in decent touch with the bat, scoring 202 runs in five matches. Kedar Jadhav had also grabbed the headlines by his recent unbeaten knock of 47 runs against Baroda.
Maharashtra’s bowling attack will be steered by Samad Fallah and Satyajeet Bachhav.

Haryana: Harshal Patel has emerged as Haryana’s talisman with his all-round abilities. The 29-year-old had delivered a match-winning performance against Meghalaya. Harshal scored 82 runs and scalped three wickets in the match to steer his side to the victory. He will be assisted by Chaitanya Bishnoi in the batting department. Haryana’s bowling line-up will be strengthened by the likes of Yuzvendra Chahal and Amit Mishra. 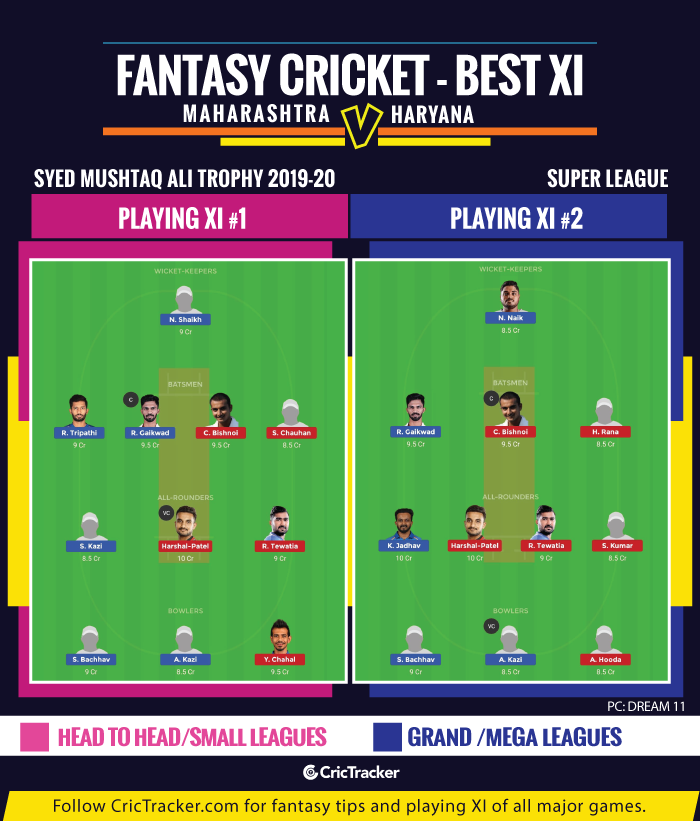 Spinners might rule the roost again and making C or VC shouldn’t be a bad idea for this match.

Maharashtra are expected to win this encounter.