Sandeep Sharma has picked ten wickets in six games so far. With the SRH pacer in red hot form, he should be a worthwhile option for the Dream11 Fantasy.

The Round 7 match in the Group C of the Syed Mushtaq Ali Trophy 2019-20 will be played between Punjab and Maharashtra at the Sector 16 Stadium, Chandigarh.

With the margin of error being small, Punjab and Maharashtra face off against each other with a place in the knockouts beckoning. Both teams have won four games each and come into this game on the back of a win. While Punjab has relied heavily upon its bowling unit, Maharashtra’s top-heavy side has churned victories to stay in contention.

On paper, Punjab holds the edge over their opponents with the experience and pedigree of the likes of Sandeep Sharma and Gurkeerat Singh Mann. Nevertheless, an exciting contest beckons in the final round of the Syed Mushtaq Ali Trophy 2019 on Sunday.

A clear day with cloudy conditions set to engulf the stadium. A cloud cover of 31% and humidity of 75%, as per AccuWeather, is expected with the temperature expected to hover around 22 and 25 degrees Celsius.

A good batting track awaits the two sides with some help for the spinners also on offer. Teams will prefer to bat first with the track getting slower as the game progresses in spite of the record favouring the chasing team.

Anmolpreet Singh has been the star of the show with consistent performances in the top order. The Punjab batsman has two fifties to his name so far and looks good for more against Maharashtra. His counterpart, Ruturaj Gaikwad is second on the list for most runs in Syed Mushtaq Ali Trophy 2019.

With 272 runs at an average of 54.40, Gaikwad’s form makes him a popular selection among Dream11 teams. Kedar Jadhav is a handy all-rounder who is capable of scoring quicks runs towards the end of the innings. With his international experience also in play, Jadhav is a wonderful asset to have in the Dream11 Fantasy side. 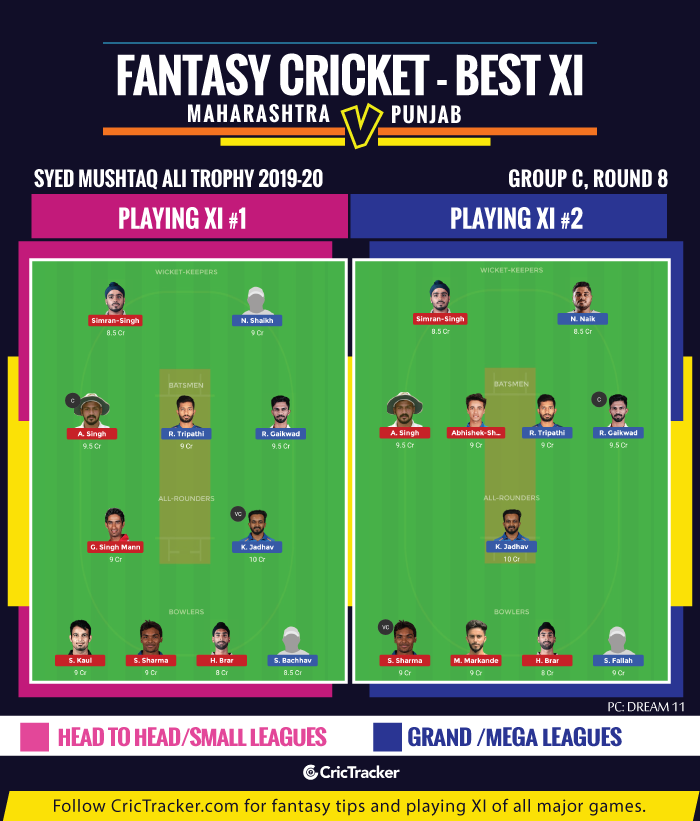 Picking two keepers would be an ideal ploy with the middle order batsmen such as Gurkeerat Singh and Mandeep Singh being rated at 9 and 9.5 credits respectively.

Sandeep Sharma has picked ten wickets in six games so far. With the SRH pacer in red hot form, he should be a worthwhile option for the Dream11 Fantasy.

Punjab is expected to win this encounter.