B Sandeep’s all-round ability will make him crucial as captain or vice-captain.

The Round 1 match in the Group C of the Syed Mushtaq Ali Trophy 2019-20 will be played between Punjab and Hyderabad at the Government Model Senior Secondary School in Sector 26, Chandigarh.

Punjab and Hyderabad will lock horns in the first match for both the teams in the Syed Mushtaq Ali Trophy 2019/20. This game will be hosted by the Government School in Chandigarh’s Sector 26. The home side will led by Mandeep Singh and the focus will be on young Shubman Gill. A good tournament at this level could put Shubman in the back-up option for the T20 World Cup next year. For Hyderabad, the likes of Mohammed Siraj and CV Milind are expected to hold the key in the tournament.

The ground in Chandigarh’s sector 26 is likely to be under the clouds for the most part of the game. The weather gets improved from the 2nd innings of the match.

The Government Model Senior Secondary School ground is yet to host a professional match. This makes it tough to predict the nature of the pitch. The venue last hosted any match was during the 2016/17 season. The JP Memorial Cup played then saw totals of 250+ by the teams batting first and winning those.

B Sandeep averaged 29.8 despite scoring a fifty in the previous edition. He is fresh of a successful Vijay Hazare Trophy with the ball. Tanmay Agarwal failed to convert way too many starts. If Tanmay gets going, he is likely to get a big score more often. Abhishek Sharma didn’t play in the previous edition but could be seen playing a key role for Punjab this time. Prabhsimran Singh produced a quick fifty in the last season and will be hoping to be more consistent this time.

B Sandeep’s all-round ability will make him crucial as captain or vice-captain. 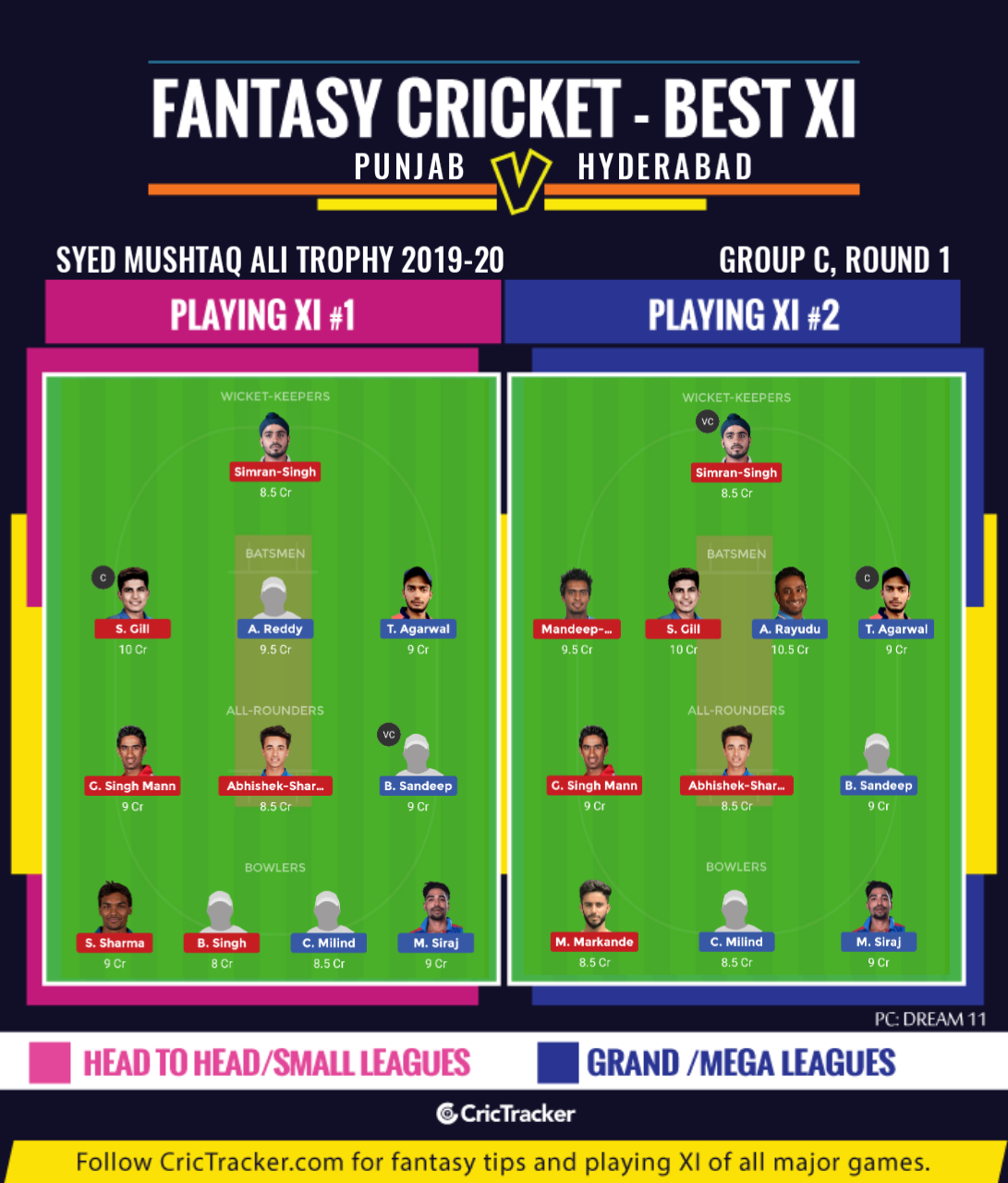 Hyderabad’s new selection committee was formed on November 4th and there is no official announcement of the squad for the Mushtaq Ali Trophy. Hence, the toss update for this match becomes crucial. If not for any toss news, we can pick core players from the Hyderabad squad. Thakur Tilak Verma might not play due to the possibility of featuring in the U19 Challenger Trophy starting on 11th November.

Punjab could face a tough fight from Hyderabad in their process of starting with a win.